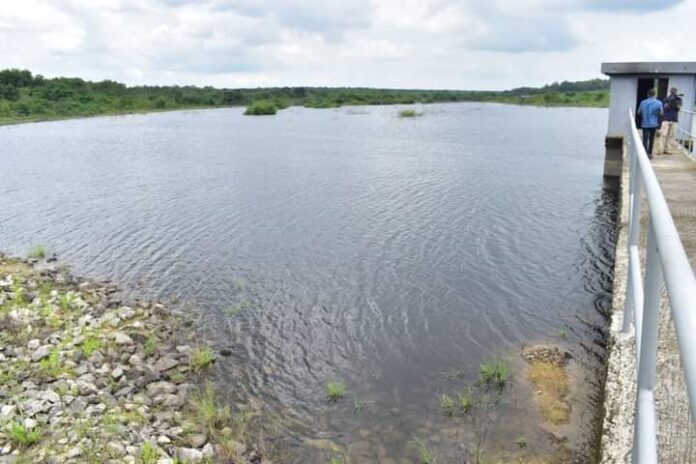 Federal University of Agriculture, Abeokuta, Ogun State has constructed a seven billion-litre capacity Dam within its land at Mawuko in Odeda Local Government Area of the state.

The Vice-Chancellor, Prof Kolawole Salako who was accompanied by other principal officers disclosed this on Tuesday during a media facility tour of projects executed by his administration so far and those still ongoing.

The Dam which is situated about 20 kilometres away from the campus, he said would serve the campus including hostels, offices, and other facilities.

Prof.Salako who stated that the construction of the Dam started in 2018, added that two reservoirs and water treatment plants are ready to receive the water channeled from the Dam before they are released for drinking and other uses.

He, however, explained that the institution is expecting fund for piping of the water, and as soon “as it is approved the pipes would be procured for seamless water supply to the campus.”

Prof. Salako said the institution is open to partnership on the Dam project but such partnership must be with equity.

Talking about the water treatment plant building and the reservoirs, Prof Salako gave kudos to the pioneer VC of FUNAAB, Prof. Olorunnimbe Adedipe who he said constructed them but he said his own administration had to change most of the equipment because they had become obsolete.

He said, “I must commend the pioneer VC of this institution for his foresight in constructing the water treatment plant, and the reservoirs.

“But this water treatment plant and reservoirs had been abandoned for over 15 years and my administration had to renovate this place.

“And since many of the equipment had become obsolete, we had to buy new ones and removed those old ones.

“The Dam projects is almost completed, as you can see the water treatment plant and the reservoirs. What remains is for us to do the piping as soon as we get the fund, which we have applied for.

“This Dam would solve the water problem within the campus.”

He said though the institution has sunk boreholes here and there within the campus, he noted  that “they are getting too many and cost of maintaining them is getting higher.”

The Dam he added would also serve in irrigation farming during dry season.

Some of the projects completed and equipped visited by the journalists include Senate Building Extension phase one, Academic Maintenance Building which also housed the Directorate of Works and Physical Planning, University Power house, College of Physical Sciences,and mechanised Palm oil and Cashew processing plants among others.

The buildings concerned include the College of Engineering Phase 2 building which was named after Chief Olusegun Obasanjo, the university e- Library Extension was named after Prof. Wole Soyinka, while a twin- 250 seater capacity lecture theatre halls were named after the outgoing Executive Secretary of TEtfund, Prof. Suleiman Elias Bogoro.

Prof. Salako said “he does not only believes in just building structures” but he had ensured that those buildings were equipped with necessary equipment.

Also visited were other ongoing projects which include Livestock Processing complex, two 30-rooms and one 46- rooms undergraduate hostels, three 300-seater auditorium complexes with classrooms and offices and College of Animal Science Livestock Production among others.

Prof. Salako said five years tenure was enough for a serious VC to accomplish his or her programmes for the institution he or she superintends if he or she planned well.

He gave glory to God for all his achievements, stating that all what he has done were what God has enabled him to do, and as his tenure ends on October 31, 2022, he added that the incoming administration would continue where he would have stopped.

He said, “Some projects are ongoing and some may be completed in October, the person taking over will be reasonable to complete them. And you know university administration is a continuum, the incoming administration would continue where I would have stopped.

“There were some uncompleted projects which my administration met and we completed them.”

“Anyone coming in should see the university as our university, but when you isolate yourself from the previous administration as a different identity that may lead to uncompleted projects.”