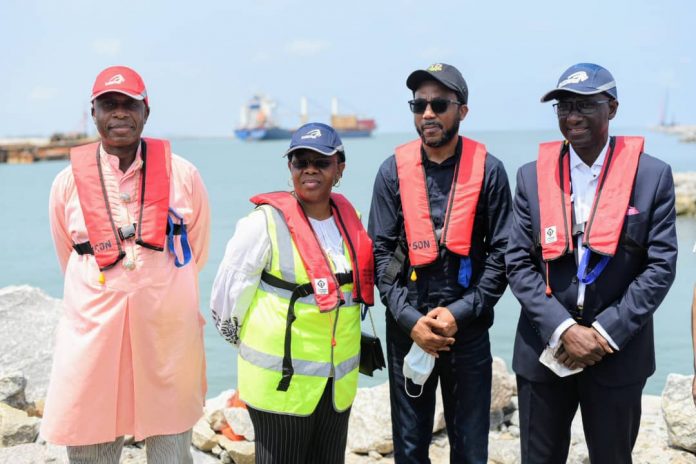 The Minister of Transportation, Rotimi Amaechi has expressed great satisfaction with the level of progress recorded on the construction of the Lekki Deep Sea Port project.

He revealed this on Saturday during an inspection visit to the Port by the Federal Ministry of Transportation and other government agencies including the Nigerian Ports Authority, the Nigeria Shippers Council and the Nigerian Maritime Administrative and Safety Agency.

He said, “I am very delighted and impressed with the pace and the progress of construction work on this project from the last time I was here in November 2020.

“The promoter of the project-Lekki Port LFTZ Enterprise Limited has demonstrated strong commitment and capacity to deliver the project as agreed,” he said.

The Minister further urged the management of Lekki Port LFTZ Enterprise Limited and other stakeholders to work tirelessly to ensure that the Port becomes operational by mid 2022.

While briefing the Minister and his entourage on the status of construction of the Port, the Chairman, Lekki Port LFTZ Enterprise Limited, Mr Abiodun Dabiri disclosed that the entire port construction “is now at 55.48 per cent completion.”

Giving a further breakdown of the status of the components of the port, Dabiri noted that dredging and reclamation has reached 61,11 per cent, Quay Wall 50.39 per cent, Breakwater 67.49 per cent while the landside infrastructure development has reached 33.70 per cent completion.

Dabiri assured the Minister and the stakeholders that the project “is on course and going according to schedule.”

He declared that at the end of third quarter (Q3) 2022  the construction would be completed while commercial operations would commence by fourth quarter (Q4) 2022 as planned.

“We understand the significance of this project is to the Nigerian economy and we would not fail to play our part to ensure that it is delivered as and when due,”he said.

The Chairman expressed profound appreciation of the company to the Minister and his team for providing the necessary support that has assisted the company to deliver on the mandate for the project.

Also speaking during the visit, the Acting Managing Director, Nigerian Ports Authority, Mr Mohammed Bello-Koko assured that the Nigerian Port Authority is ready to play its part to ensure smooth take-off of port operations upon completion of construction.

He disclosed that NPA has commenced the process of acquiring all necessary marine equipment including tug boats and mooring boats.