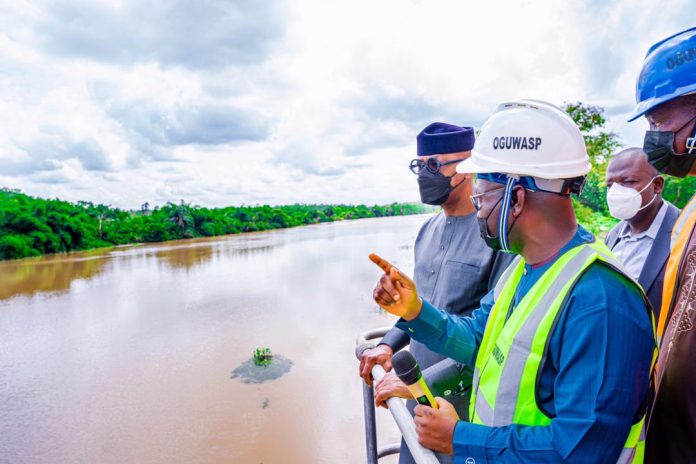 The challenge of scarcity of pipe borne water will soon be a thing of the past in Abeokuta and other parts of Ogun as the governor, Prince Dapo Abiodun has promised residents uninterrupted water supply.

He gave this assurance on Tuesday, shortly after he inspected the Arakanga Old Water Works, Abeokuta.

He hinged his promise on the speedy completion and installation of the five ‘Barage Gates’ that would allow for proper damming and effective distribution of drinkable water to the people.

The governor who expressed satisfaction with the level work done at the facility, added that its rehabilitation was in tandem with his administration’s social welfare and well-being pillar, which has provision of potable water as a major component.

He noted that with thus intervention, his administration would also be providing water in other major cities such as Sagamu, Ilaro, Ota and Ijebu-Ode.

He said, “We have slated our water provision  across the state as our post mid-term agenda, in line with our provision of infrastructure. And under our social welfare and wellbeing pillar, water features prominently and this was our immediate intervention.

“We are also providing water in our major cities such as Sagamu, Ilaro, Ota and Ijebu-Ode had been scheduled for post May 29, 2021. So, you will begin to see all our initiatives in this direction.

“We are looking at the distribution, reticulation and in no time, I’m sure that the good people of Abeokuta and the people of the state will begin to enjoy water supply that is clean, adequate, efficient and reliable, just like any other city worldwide.”

Abiodun attributed the disruption in  supply of water across the state to the failure of the immediate past administration to prevail on contractors handling various road construction to repair water installations destroyed by them.

He, however, said he had included clauses which mandate contractors to repair water and other installations damaged while constructing roads and other infrastructure.

“The previous administration had awarded road contracts and the contractors had actually damaged the water reticulation without it being embedded in the contract clauses that will ensure that the water pipes were repaired.

“So, we have revisited that now, our contracts now have clauses in them where any utility that is damaged by the contractor will be repaired by that contractor, so that we don’t have this type of situation repeating itself.” he said.

The governor said the ‘Five Gates’, which allowed for proper damming of water when Ogun-Oshun River Basin failed to release enough water “is now being operated automatically as against the manual system in the past.”