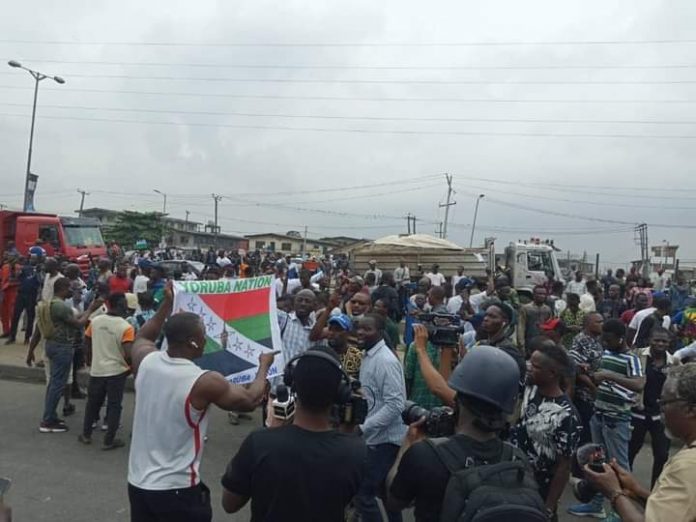 Journalists and protesters scampered for safety as the policemen stationed at the Gani Fawehinmi Freedom Park, Ojota splashed hot water from water cannon and also fired teargas canisters to disperse the Yoruba Nation agaitators on Saturday.

This happened shortly after the state Commissioner of Police, Hakeem Odumosu abruptly ended a press interview with journalists, as scores of protesters surrounded him and journalists.

Some of the protesters had expressed their frustrations and clamoured for a better condition of their predicament.

Some said they couldn’t feed nor pay their bills anymore due to the economic hardship in the country.

As this was going on, confusion broke out as journalists and the protesters were splashed with hot water from the stationed water canon vehicle nearby. 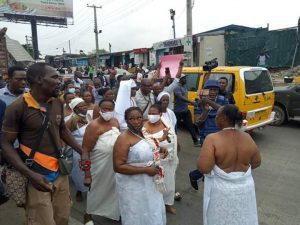 They all scampered for safety. However, some of the protesters were arrested in the process.

At a stage, another set of protesters led by a white-cap wearing man, followed by some women, also dressed in white wrappers and headgears had moved towards the policemen and said they were there for a peaceful rally, and urged the police not to fire any teargas canisters or shoot.

But before they could conclude their statement, shots of teargas canisters rang out, throwing the place into another round of confusion.

Speaking earlier, the Commissioner of Police, Hakeem Odumosu had told journalists the command was only being proactive by the heavy security presence at the venue.

The park had been chosen by the Yoruba Nation agitators to hold the Lagos edition of the rally this Saturday, having done rallies in five other South-West states. 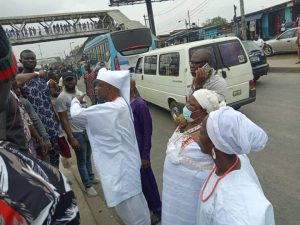 However, early this morning the operatives of OP-MESA made up of the military, and hundreds of policemen from different formations across the state had cordoned off the venue.

Many patrol vans and other operational vehicles were seen at strategic points in and around the venue.

However, Odumosu said, “We are only being security conscious and proactive. On Thursday I have spelt the reasons why the protest could not hold.

“Some hoodlums have also perfected plans to hijack the protest. You know what happened in Lagos during the ENDSARS protests, where the hoodlums hijacked it.

“Lagos is yet to recover from it. Many policemen were killed, properties were destroyed.”

He acknowledged that the citizens have the right to protest or hold rallies but this could only hold if they carried the police along by providing details of what they really wanted to do.

He explained that they ought hold a meeting with the police where the modalities would be unveiled as to the scope of the protest, the number of people to be involved and the locations where the protest would hold among others.