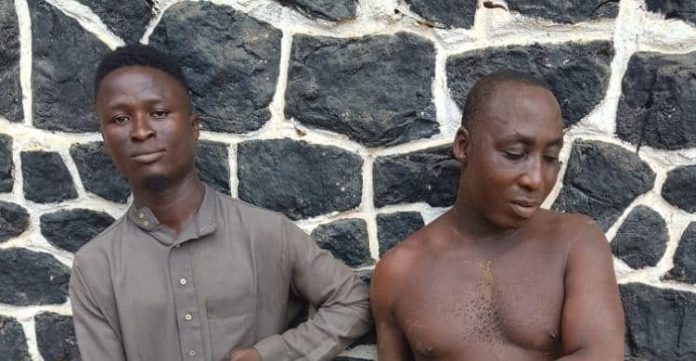 Operatives of the Ogun State Police Command say they have arrested three suspected land grabbers at Itusokun quarters in Odogbolu area of the state.

Police report indicated that the trio were nabbed on Friday 18th June 2021.

The state Police Public Relations Officer, Abimbola Oyeyemi said the suspects were arrested, following a report lodged at Odogbolu Divisional headquarters of the command by one Kemi Olukoya.

He explained that Olukoya had reported that while she was at her new site supervising construction workers, a group of boys numbering about eight invaded the site, and started shooting repeatedly and chased the workers out of the site.

He added that she stated further that, the hoodlums also snatched her bag containing sum of N500,000 (Five hundred thousand naira)and her handsets valued at N40,000 (Forty thousand naira) at gun point.

Acting on this report, the Divisional Police Officer, Odogbolu, SP Adeniyi Awokunle mobilised his men, and moved to the scene.

Oyeyemi said while they got there, the hoodlums were seen escaping through the nearby bush, they were hotly chased and one of them by name Wasiu Adenuga was subsequently apprehended.

He said further combing of the bush led to the arrest of two others namely; Michael John and Moruf Alaba, while three Bajaj motorcycles they used for their operation were also impounded.

Oyeyemi said the victim had identified the three of them as members of the gang that attacked her and her workers.

He also directed that the remaining members of the gang be hunted for and brought to justice.