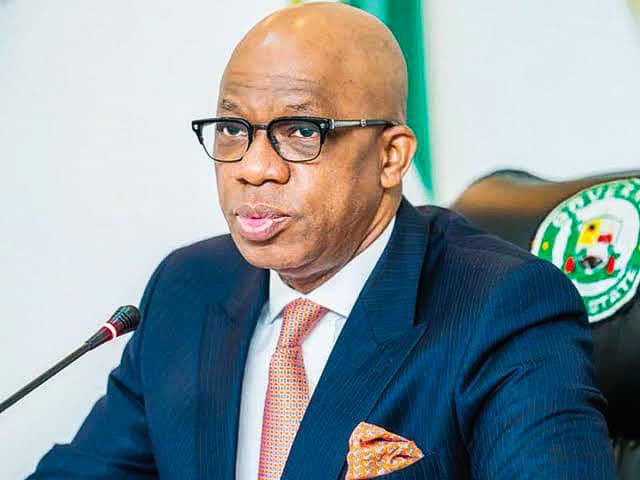 Ogun State Governor, Prince Dapo Abiodun has warned that his government will demolish house found to be harbouring criminals such as kidnappers, and bandits among others, even after arresting the criminals.

He said this over the weekend while speaking at the 11th Synod of the Diocese of Yewa, Anglican Communion, Ilaro.

The governor said his administration was determined to rid the state of all manner of criminal elements, and he advised landlords in the state to carry out due diligence on their tenants before offering them accommodation.

He said, ‘Our administration is determined to rid the state of bandits, kidnappers and other criminals. If we arrest any kidnapper, bandit or any other criminal, not only would we deal with him with the full extent of the law, we would also demolish any house found to be harbouring criminals. So, you must know your tenants.”

At the Synod with the theme, ‘But, They That Wait Upon The Lord’, the governor appealed to those clamouring for war and secession to have a rethink, because of its their dire consequences.

Though he noted that the country is going through challenges of banditry and kidnapping, he called on Nigerians to be their brother’s keeper, as he believed in the unity and oneness of the country.

He added, “I want to admonish us that these are difficult times for this country, we need to see ourselves as our brothers’keepers. You know the Bible says we should love our neighbours like ourselves.

“This year, there is so much banditry, kidnapping, and the reason why people are calling for secession and break up of this country. That must not happen, it is only someone that does not recall what happened during the Civil War that will continue to beat the drums of war.

“we will not be attributed by any ploy to divide this country, we believe in the oneness and indivisibility of this country because there lies our strength,” Abiodun posited.

Governor Abiodun equally disclosed that his administration had reached advanced stage of discussion with the Federal Government for the reconstruction work on the Papalanto-Ilaro-Sagamu Interchange Road.

He explained that the ongoing construction work on the Ilaro-Owode Road was deliberately broken into sections in order to speed up the rehabilitation of the road.

“There is no local government in Yewaland that we are not constructing roads. Here, in Ilaro, we are doing the Ilaro-Owode Road, that project has been slower than we anticipated and I have since intervened. I have decided to break that project into two and leave part of it with the existing contractor, and bring in a new contractor to speed up the construction of that road.

“I have started discussions on the commencement of the Papalanto-Ilaro-Sagamu Interchange Road, our discussion is at conclusive stages. So, very soon, you will see mobilization to site for the construction of that road. That road is a very critical one for our East to West connection,” he said.

The governor, who also disclosed that his administration would be inaugurating the Imasayi Road in Yewa North Local Government later in the month, also added that roads in Imeko and Ipokia would also be inaugurated in the next three weeks.

Earlier in his charge, the Diocesan Bishop, Diocese of Yewa, Rt. Reverend M. A. Oluwarohunbi, commended Governor Abiodun for running an all-inclusive and participatory government.

Oluwarohunbi, while also commending the present administration in the state for its spontaneous approach to the issue of insecurity as a result of the various attacks by herdsmen, lauded the governor for joining hands with other South-West states to form a regional security outfit.

The Bishop further appreciated the governor for giving the State Hospital in Ilaro a facelift both in outlook and service delivery.

In his remarks, the Chairman of the occasion, Senator Solomon Adeola, represented by his Special Adviser on Media, Kayode Odunaro, commended the governor for his approach to governance, saying he was happy with the current state of development in the state.