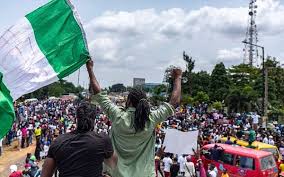 Protesters have early this morning took to the streets in some cities across the country to hold peaceful protest to mark June 12 also known as Democracy Day.

Our correspondent observed that there are protests in Abuja, Lagos, Akure, Osogbo, Ibadan among others, in which protesters armed with placards and banners with inscriptions on June 12, and the symbol of that watershed 1993 presidential election late Chief MKO Abiola pictures etched on the flex materials.

In Lagos, the protesters had stormed the Gani Fawehinmi Freedom Park, Ojota

However, one of the protesters in Lagos had accused some policemen of given him several slaps and one of them had seized his handset on the purported allegation that he was recording the protest.

In the video showing the protester which had gone viral, he said, “I was given several slaps by team of policemen this morning, you could the marks of their hands on my face.

“In the process, one of them seized my handset, claiming that I was recording the protest..”

In Abuja, it was also reported that the protesters were dispersed by police using teargas canisters.

So far there has not been major faceoff recorded in the protests.