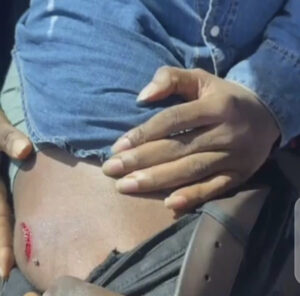 The publisher of online news medium, SaharaReporters, Omoyele Sowore, has been reportedly injured by a teargas canister allegedly fired by a female police operative in Abuja.

He was said to have been shot on Monday at the Unity Fountain in Abuja.

Sowore was preparing to hold a rally with some associates when the incident happened at the venue.

However, the FCT police command had denied firing any shot at Sowore.

In a statement signed by the spokesperson for the command, Mariam Yusuf, said contrary to the report, police operatives deployed in the scene professionally restored calm at the protest venue.

The statement titled ‘Police restores calm at the Unity Fountain’ read partly, “The FCT Command wishes to debunk the viral message in some sections of the social media purporting that ‘Omoyele Sowore was shot by a female Assistant Commissioner of Police’ at the Unity Fountain.

“Contrary to the speculation, police operatives professionally restored calm at the Unity Fountain following attempts by a group of protesters to incite a public disturbance.”