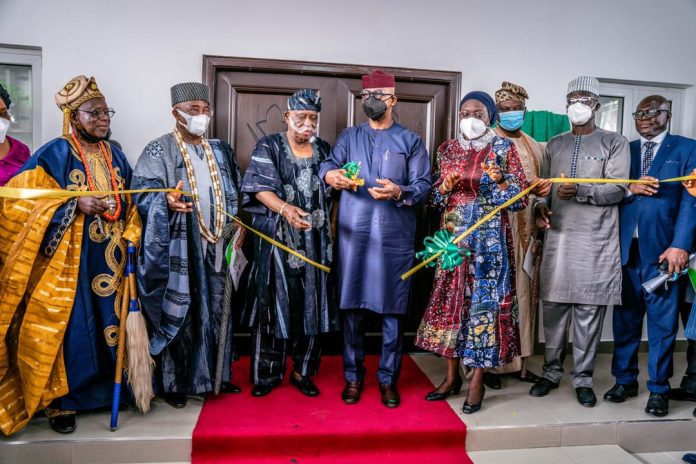 A former Governor of Ogun State, Chief Olusegun Osoba, on Tuesday described the first 16 years after he left office as governor of the state as “traumatic” and “problematic.”

He spoke on Tuesday at the inauguration of the new press centre at Oke Mosan, Abeokuta built by the current administration led by Prince Dapo Abiodun.

The press centre was christened Olusegun Osoba Press Centre in his honour.

The notable journalist left office in 2003.

Narrating his ordeal to the battery of journalists present at the event, Osoba noted that the first phase of 8 years was “traumatic” as he was declared persona non grata in the state.

He, however said those involved had apologised to him.

He added that the second phase of 8 years was “problematic.”

The former said immediately after he handed over in 2003, he was declared persona non grata in the state, which he said prevented him from entering the state after his tenure.

He said, “When I left office, I was so harassed to the point that all the plaques and the symbols of all the projects I did were the first to be removed throughout the state.

“The first 16 years of my leaving this office have been very, very traumatic. I never came back, I became a snake that doesn’t go back to where it has turned over its skin. This premises (Governor’s office) became a no-go area for me. To imagine that in my life, my return to this premises will be this glorious is something of emotion.

“The first eight years, I was virtually declared persona non grata in Ogun State, well, that is settled, those involved have come to apologise.

“My name was sent to EFCC so many times. The EFCC investigated, because everything was documented in files, they found nothing.

“I couldn’t come to Abeokuta not to talk of visiting the office of the Governor. The other eight years, that one, also became problematic.”

Elated and heaving a sigh of relief, Osoba exhibited excitement for the recognition accorded him at the Oke-Mosan Governor’s office by the new administration.

He noted that this recognition had added to his years on earth.

He explained further that God made Prince Dapo Abiodun governor of Ogun State and not man.

Osoba explained that Dapo Abiodun was not an aspirant of All Progressives Congress in the build up to the 2019 governorship race “but God who works in a mysterious way, brought him forward afterwards and made him Governor today.”

He said that he(Osoba) was merely a part of the process through God deployed to make Abiodun the governor of Ogun State.

In his address, Abiodun eulogised Akinrogun Osoba for his numerous contributions to the state, especially the opening up of the rural areas, and the giants strides he had made in the nation.

He advised journalists in the state to shun sensationalism in their reportage and embrace developmental journalism.