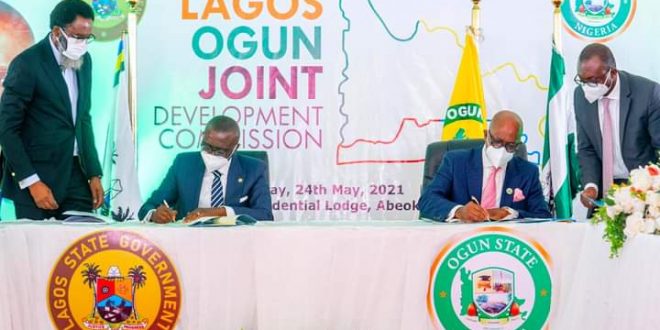 Governor Dapo Abiodun of Ogun State and his Lagos State counterpart, Babajide Sanwo-Olu, on Monday, signed a Memorandum of Understanding on the establishment of the Lagos -Ogun Joint Development Commission.

The signing of the MoU which took place at the Marquee of the Presidential Lodge, Abeokuta, was witnessed by top government functionaries from the two states, traditional rulers, federal and state lawmakers, and captains of industry.

Governor Abiodun said the official launch of the Joint Development Commission would further initiate and accelerate more projects necessary to aid ease of movement of people, goods and services.

He added that initiative would also increase industrialisation along all the border communities and ensure a wholesome development of the two states.

He noted that the signing of an “historic Memorandum of Understanding” took cognizance of what had been envisioned, leading to the establishment of the Prof. Akin Mabogunje’s Committee on Redeployment of Lagos Megacity Region Plan between 2005 and 2006.

According to Abiodun, the Joint Development Commission would forge a common alliance between the two states, to jointly tackle issues bordering on security, sanitation, traffic and transportation, waste management, and water supply.

Other include land use planning, infrastructure development and maintenance, urban renewal and slum upgrading, for the mutual benefit of the people and the generality of Nigerians.

The governor explained further that the MoU “is a culmination of various efforts by state and non-state actors who have seen beyond the geographical delineation of Lagos and Ogun and would focus more on social-economic development areas such as infrastructure development: revenue and taxation; trade and investment; resolution of boundary disputes; agriculture and food security among others.

“This MoU, is therefore a manifestation of the common dream that the nation’s largest economy and the nation’s industrial capital are forging because both are deliberate, focused and methodical to governance.

Again, I must thank my brother governor, His Excellency Babajide Sanwo-Olu for his own cooperation, enthusiasm and support for this initiative.

“Before now, together, we had jointly written, formally to President Muhammadu Buhari to release the Lagos-Ota-Abeokuta and the Ikorodu-Sagamu Roads for us to jointly reconstruct.

“If we jointly do this, there will be development which will continue to increase employment generation, poverty alleviation and food security”, he stated.

Abiodun, however, called on the private sector to support and collaborate with the governments in the success story of the Lagos-Ogun Joint Development Commission, so that the enduring development we all crave for in Lagos and Ogun States can be more guaranteed.

Earlier in his remark, Governor Sanwo-Olu noted that the emergence of Lagos as a megacity with a population of over 22 million people had made it expedient for greater synergy with other States, especially Ogun for sustainable socioeconomic development.

He described the Memorandum of Understanding as a “game changer” that would transform the urban agglomeration that Lagos State has become.