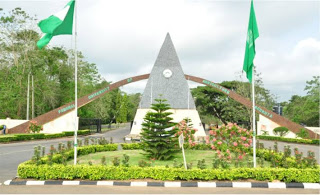 A 400-level student in the Department of Aquaculture and Fisheries Management, College of Environmental Resources Management, Federal University of Agriculture, Abeokuta, Ogun State, Toyinbo Olayinka, has been abducted by suspected kidnappers in a private farm at Abule Itoko, Odeda, Ibadan Road.

Olayinka, this medium gathered was reportedly kidnapped alongside the owner of the private farm, identified as Dominic, and a 17-year-old Togolese lady.

According to a statement signed by the Head, Directorate of Public Relations of FUNAAB, Mr Kola Adepoju, Abule Itoko, where the student was reportedly abducted around 8am on Saturday, is about 25 minutes drive from the University Permanent Site at Alabata Road, Abeokuta.

The statement further said that a friend of the abducted student and a nursing mother, who witnessed his abduction, said he was kidnapped by gunmen at a private farm in the village in the Odeda Local Government, where he is living and working as a practising livestock farmer for the past three years,

to sustain himself as a self-sponsored and indigent student of the University.

FUNAAB spokesman however said the university management has reported the abduction to Ogun State Police Command headquarters, Eleweran and “is working earnestly with the Command to ensure the safety and release of the kidnapped student.”

In recent times, Ogun State has witnessed cases of kidnapping in various parts of the state especially in Abeokuta, Yewa and Ijebu axis among others.

A Deputy Director at the Information and Communication Technology Department of the Tai Solarin University of Education, Ijagun, Ogun State, Mrs I.B Abimbola, was reportedly kidnapped at Ijebu Ode last Tuesday and she is yet to be released.