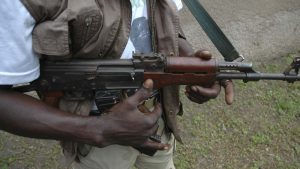 Gunmen suspected to be kidnappers have reportedly shot dead a policeman, abducted four others including another policeman at Ibara Orile, located in Abeokuta North Local Government Area of the state.

This incident came after four travellers were abducted by gunmen along Ayetoro-Imeko- Ilara Road on Tuesday while returning from a market at Ilara.

However, five others were spared among the passengers.

In the recent kidnap, a couple who had gone to prospect for a land for fish farming and an official of the state Ministry of Agriculture, who is an extension expert were among the victims.

The policemen had escorted the farmers as guards before the sad incident.

Meanwhile, the suspected kidnappers had not made  any contact with family members of the abductees as at the the of filing this report.

However, the state Police Public Relations Officer, Abimbola Oyeyemi has confirmed the incident, and suspected there must have been an insider collaboration.

He said the team was ambushed by gunmen “through a connivance from an insider.”

Oyeyemi added that the command was already on trail of the suspected kidnappers and would ensure they are brought to book and the victims rescued unhurt.

He said, “The way the thing happened is more or less like a conspiracy from an insider. The man was ambushed his orderly was shot.

“We are on it. The command is doing everything to make sure that we got those that are behind that act.

“And a policeman was shot and killed, that means those people who did it have murdered sleep and would not sleep again.

“We will not rest until we fish them out one after the other, no matter who they are .”