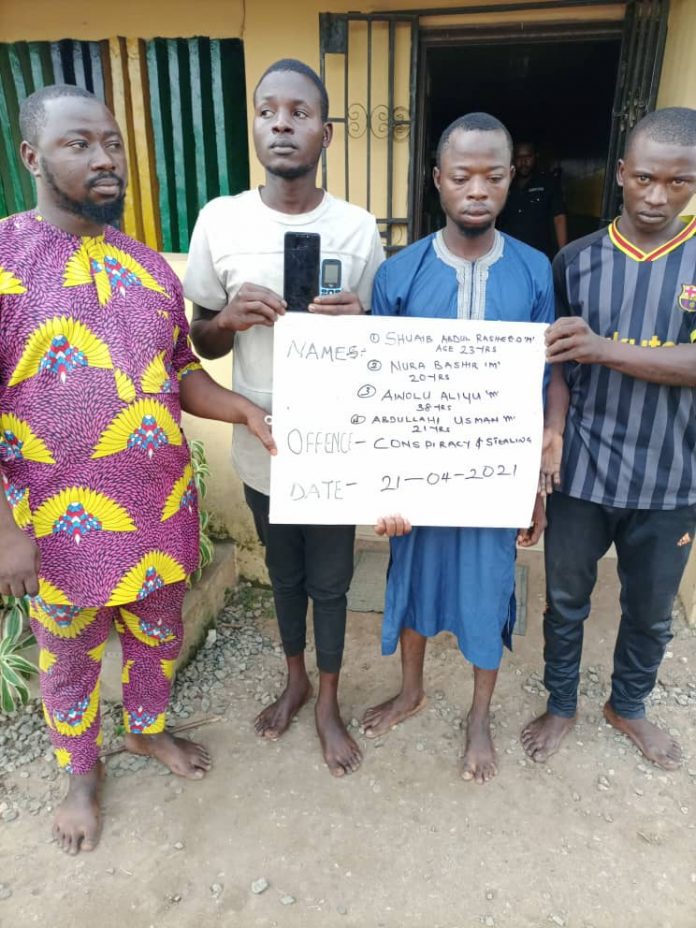 Operatives of the Ogun State Police Command say they have apprehended four suspected burglars who burgled a phone accessory shop in Ile Ife, Osun State and ran to hibernate in Ogun State.

According to the state Police Public Relations Officer, Abimbola Oyeyemi, the suspects were nabbed on the 21st April, 2021, following a report by one Gbenga Siyanbola.

He said Siyanbola had reported at Mowe Police Station that, while he was coming from Osun State going to Lagos, his vehicle developed a mechanical fault somewhere in Mowe.

The state police spokesman added the victim explained that while he trying to rectify the fault, the four suspected burglars suddenly appeared from nowhere, pounced on him and robbed him of his Samsung phone.

Based on the complaint, Oyeyemi said the Dvisional Police Officer, Mowe, CSP Marvis Jayeola detailed his detectives to go after the hoodlums.

He said, “The detectives after weeks of painstaking investigation were able to trace one of the suspects to Ikire in Osun State where he was apprehended.

“His arrest led the police to arrest his other three accomplices. Surprisingly, in the course of investigation, some other phones and accessories which had earlier been stolen from the complainant’s shop were also recovered from the suspects.”

Oyeyemi said preliminary investigation revealed that, the suspects had earlier burgled the shop of the same complainant at Ile-Ife in Osun State and that the case was reported at A Division Moore, Ile Ife.

Meanwhile, the state Commissioner of Police, Edward Ajogun has ordered that the suspects be transferred to Osun State Police Command for diligent prosecution.