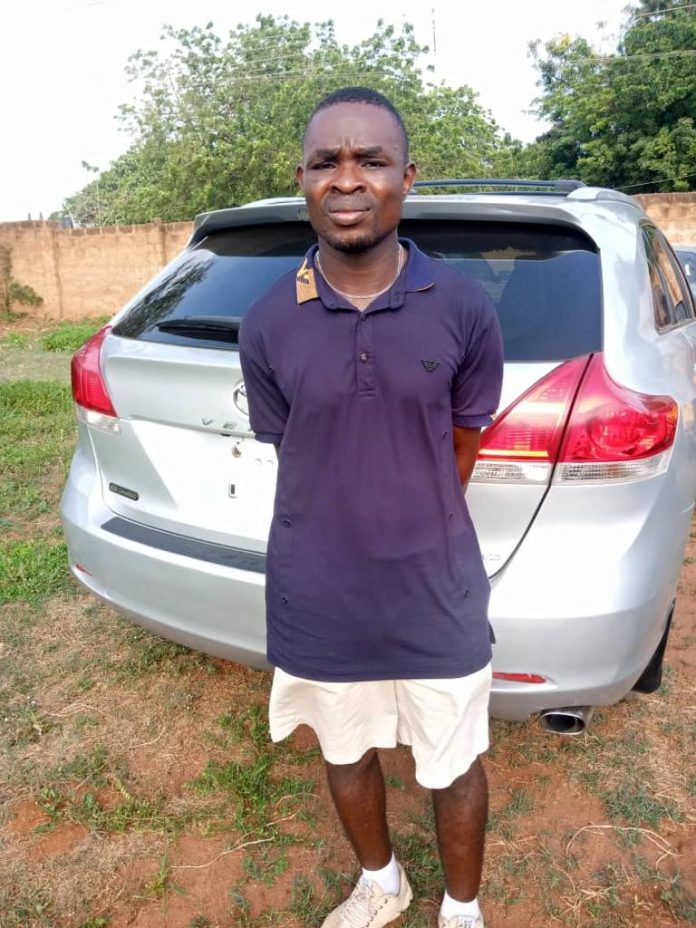 Operatives of the Ogun State Police Command say they have arrested a car wash-man, Kazeem Olanrewaju, for allegedly fleeing with a customer’s Toyota Venza with number plate APP 775 GB from Lagos.

The suspect who was arrested on Tuesday 6th April at Idiroko in Ipokia Local Government Area of the state, police said stole the car at a car wash at Festac Town, Lagos where he works as an attendant.

The Ogun State Police Public Relations Officer, Abimbola Oyeyemi said the suspect drove the car in a suspicious manner which drew the attention of the Divisional Police Officer, Idiroko, Shadrach Oriloye, and his team who were on patrol.

Their curiousity doubled as the suspect had removed the number plate, and was headed towards Republic of Benin.

Oyeyemi said the DPO and his team flagged down the vehicle, but the suspect sped past them, which made them to give him a hot chase.

When he was interrogated, according to Oyeyemi, Kazeem confessed that he was working with a car wash outlet in Festac Town Lagos State, and he was given the car by a customer to wash while the owner went to a nearby barbing saloon to have his hair cut.

The suspect told the police that before the customer returned from barber’s shop, he decided to flee with the car, because he had the key with him.

Oyeyemi added that a case of car theft had been reported by the owner at the Festac Town Police Station, and the station had been on the lookout for it.

Meanwhile, he said the station has been informed of the recovery of the car, while the state Commissioner of Police, Edward Ajogun, has ordered a thorough investigation into the past activities of the suspect before handing him over to Lagos State Police Command for prosecution.

Recall that another car wash attendant, Idris Ayotunde, was arrested on the morning of December 4, 2020 by men of the Ogun State Police Command, at Alakija Village via Olodo in Odeda Local Government Area of the state, while fleeing with a customer’s Ford Jeep, he allegedly stole from Akowonjo area in Lagos.