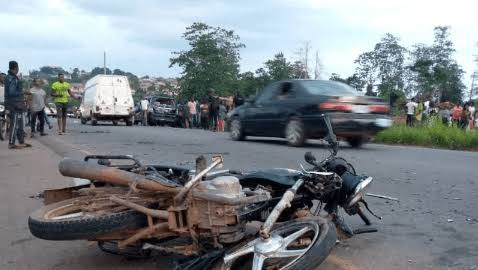 Two students reportedly to be from same parents were crushed to death by a truck while two of their colleagues were injured in the auto crash  which occurred in Sotubo area Ogijo, Sagamu Local Government Area of Ogun State on Thursday.

According to the Public Relations Officer, Ogun State Traffic Compliance and Enforcement Corps, Mr Babatunde Akinbiyi, the tragic incident while the students were heading to their schools, all of them commuting on a motorcycle.

He said one of the students took others on the bike while on the ill-fated trip on Sagamu-Ikorodu Road. And they were headed to Idagba Community High School, Sotubo, and Wesley Primary School, both in Ogijo.

The TRACE spokesman said an eyewitness account has it that the rider of the motorcycle was trying to find his way between two articulated vehicles, when the motorcycle fell and one of the tyres of one of the vehicles ran over them.

Akinbiyi said two of them died instantly at the spot while two others suffered varying degrees of injuries.

He further added the driver of the articulated vehicle involved, the vehicle with number plate SHR 35 XA and the motorcycle have been taken to the Divisional Police Station, Sotubo, Ogijo.

He said the corpses of the deceased had been deposited in the morgue at the Olabisi Onabanjo University Teaching Hospital, Sagamu and the injured were receiving treatment in the same hospital.

While Akinbiyi said the TRACE commiserates with the family of the deceased, “it is also using this medium to appeal to pillion riders (okada riders), to exercise patience and caution, as well as avoid reckless and dangerous riding because of its attendant consequences.”