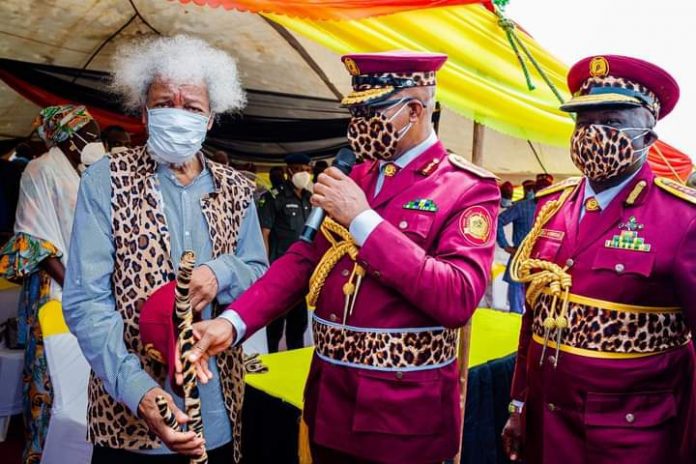 Nobel Laureate, Prof. Wole Soyinka on Thursday also warned the newly inaugurated Amotekun corps in Ogun State against the abuse of their uniforms, as this may attract dire consequences.

He spoke in Abeokuta shortly before he was decorated by Governor Dapo Abiodun as the Super Marshall of the Amotekun corps during the inauguration of the state’s version of the South-West Joint Security outfit known as, Amotekun.

In his remarks, Soyinka who said the society was watching the Amotekun corps’ performance, warned them not to become a thorn in the flesh of the people, as the state would deal with their misdemeanour before ‘Ogun’ would strike them.

He also advised the police and other security agencies to eschew what he called “silly competition” with the Amotekun corps.

He said as a critical stakeholder of the civil society group what he could contribute would be to monitor, advise, and see how the initiative could work out rationally, ensuring they did not trample on the rights of citizens.

Prof. Soyinka reminded the Amotekun corps that they were created to assist the citizens, protect them, to be part of them, to live inside them, to gather information and to play a complementary role to the police and the military.

He said, “So Amotekun, we are watching you, if you abuse your uniform, before Ogun strikes you, we would have dealt with you.”

Prof. Soyinka recalled how burglars had burgled his Kemta home in Abeokuta sometimes in the past and made away with “sensitive materials” despite reporting the incident to the police, the perpetrators were yet to be apprehended.