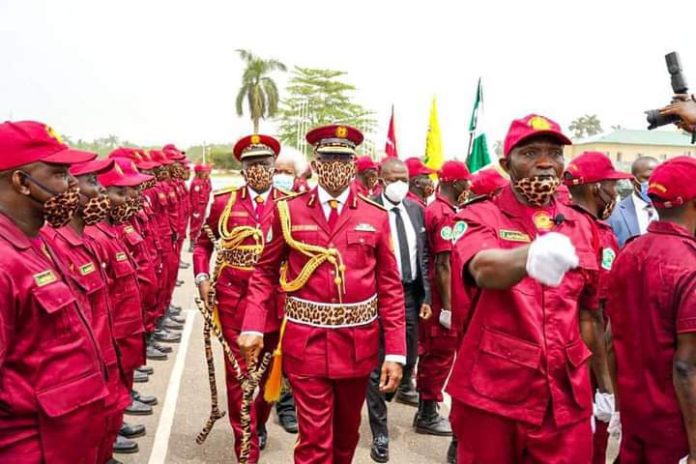 Ogun State Governor, Prince Dapo Abiodun says the state’s Security Network codenamed Amotekun Corps, is not meant to compete with other security agencies in the state.

He said this on Thursday when he inaugurated the state’s Amotekun Corps at the arcade Ground, Oke Mosan, Abeokuta.

The governor also inaugurated patrol vehicles and motorcycles for the operation of the corps.

The corps is expected to assist the state in tackling insecurity, especially in Ogun West Senatorial district, with records of kidnapping and attacks of farmers by killer herdsmen.

Governor Abiodun who noted that the security challenges facing the State and the nation as a whole, needed the cooperation of all Nigerians and security agencies who should work in harmony and not engage in unnecessary competition.

Abiodun said, “Let me note that the inauguration of the Amotekun in Ogun State is not to create unnecessary competition with other security agencies in the State. And this is why everybody must work together to further strength security of lives and property in the State.”

He recalled that the establishment of the special security outfit was agreed on by leaders and governments of the six South- west states in June 2019, as part of holistic approach towards tackling the rising wave of insecurity in the region.

Abiodun stated that the delay in the establishment of the outfit in the state was borne out of the need to be meticulous and inclusive by allowing the people to participate in the decision-making process that affected them.

“We cannot but factor our economic status and other peculiarities into any security machinery we want to put in place. That is why operation of the Amotekun in Ogun State looks like a delay. For us, it is never a delay; it was a calculated and methodical process in thoughts, action and to ensure a hitch-free service delivery”, he explained.

Speaking on behalf of traditional rulers, the Alake of Egbaland, Oba Adedotun Gbadebo, said though Ogun was one of the safest states in the country, he called on security agencies to share intelligence report in order to rid the state of crime.