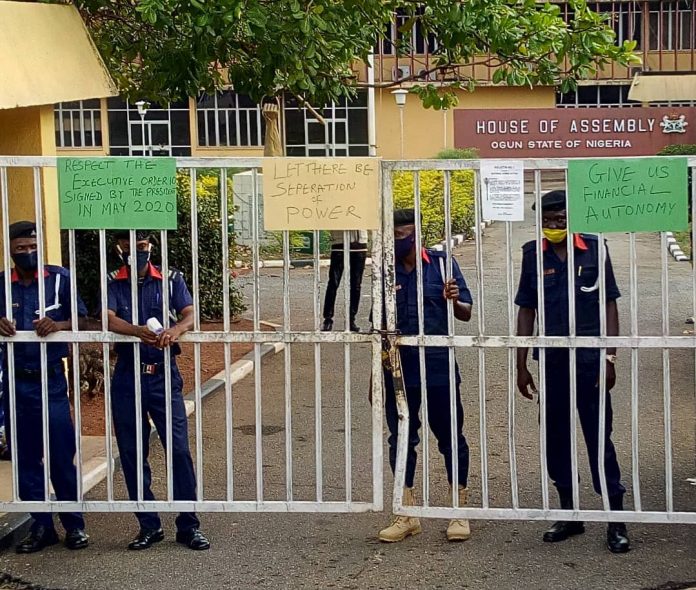 Plenary and other legislative activities were grounded on Tuesday at the Ogun assemby as the state chapter of Parliamentary Staff Association of Nigeria joined other 35 states of the federation on an indefinite strike.

Our medium gathered that the strike was as a result of the refusal of government to implement financial autonomy for the legislature as enshrined in the 1999 constitution (As amended).

The state Chairman of PASAN, Mr James Obanla, told journalists tha the assembly staff had to join the strike as ordered by the national body of the association, adding that all activities would be grounded indefinitely.

He explained that despite many notices had issued to the government on the need to implement the financial autonomy signed into law by President Muhammadu Buhari, there had been no action.

The PASAN chairman who said the strike would affect correspondences from the executive arm of government, stated that he believed that the issue would soon be resolved.

He noted that when the autonomy would enhance the business of government and also provide room for separation of power.

“The strike is indefinite, the business among the three arms of government will be affected. Today’s plenary has already been affected and the stakeholder schedule for tomorrow will likely to be affected too, ” he said.

While addressing the striking staff, the Speaker, Mr Olakunle Oluomo, said the governors were not opposed to financial autonomy for legislature, adding that modalities for the implementation remained the major issue.

He said, “We are getting towards the implementation of the financial autonomy, the conference of speakers have met with the governor’s and they are all in support of the autonomy.”