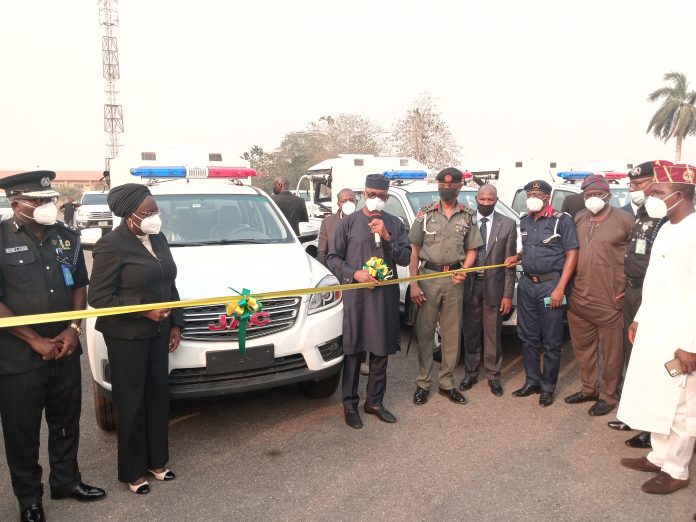 The Governor of Ogun State, Prince Dapo Abiodun on Tuesday launched the patrol vehicles and motorcycles to be deployed to the troubled areas in Yewa area of the state, which had witnessed farmers-herders clashes.

Making the presentation to the security agencies at the arcade ground, Oke Mosan, Abeokuta, the governor who was supported by his deputy, Engineer Noimot Salako-Oyedele, the Secretary to the State, Olatokubo Talabi among others, said the 10 patrol vans and 20 motorcycles were the first set to be deployed to the troubled zone where farmers-herders clashes had occurred.

While he explained that in due course more vans would be added, he noted the deployment of the vehicles and motorcycles were part of the promises he made to be given to the Joint Security Interventions Squad.

The special squad, he said, comprised operatives from army, Police, Civil Defence, Directorate of State Services, and local hunters among others that would provide security in the affected communities.

Governor Abiodun said it was quite sad and painful that some people had given the clashes an ethnic colouration, arguing that it was wrong to profile an ethnic group or tribe as criminals.

Governor Abiodun warned the purveyors of fake news either on the social media or the mainstream media to desist from such act as it “this only poses a threat to peace and security,” stating that the state government would soon criminalise fake news, as it was working with the Ministry of Justice to come up with the modalities.

He added that Ogun State “is an industrial hub and such news could scare investors.”

Governor Abiodun who commended the Peace Committee set up by its administration for job well done so far, said they had released palliatives to the affected communities, and currently working out how to compensate those who suffered losses on both sides during the crisis.

Governor Abiodun said when the state finally inaugurate the state’s version of the South-west Security Network popularly known as Amotekun, the personnel would complement the work of the Special Taskforce.