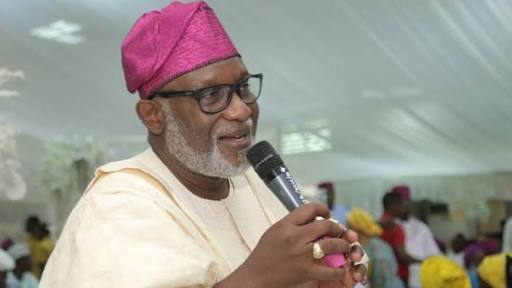 In this piece by Olatunbosun Oladimeji, he lists the achievements of the Ondo State Governor Arakunrin Rotimi Akeredolu so far, and even what he is set to do in his second term

Another page will be opened in the history of Ondo State on Wednesday , 24th February when Arakunrin Oluwarotimi Odunayo Akeredolu (SAN) will take the oath for his second term of office.

The Senior Advocate of Nigeria earned his right to another four years in Alagbaka Governor’s House with his overwhelming victory in the 10th October, 2020 governorship election.

In that election, Arakunrin bagged 292,830 with outright victory in 15 out of 18 LGAs of Ondo and very respectable performance in the three other councils to emerge victorious.

His closest challenger, Messers Eyitayo Jegede of Peoples Democratic Party was only able to garner 195,791 votes while the his rebellious deputy, Agboola Ajayi who contested on the platform of Zenith Labour Party scored only 69,175 votes without winning any local council area.

The total victory of Akeredolu in that election which was contrary to prediction of so many self-styled pundits who had a stiffer challenge had solidified the position of the top lawyer as one of the politicians to be reckoned with in the sub-region and in Nigeria at large.

Yet, the landslide win was a reward by the people of the State to Akeredolu for the gradual changes and improvements in their socio-economic fortunes in the ‘journey of redemption’ of Akeredolu in Ondo in his first four years of office.

Recall that in acknowledgment of his strides in development of the state, traditional rulers across the three senatorial zones of Ondo took the unprecedented step of staking their crowns to endorse Akeredolu for second term without minding the likely consequences if the outcome of the election had gone contrary to their expectations.

The Governor had started the journey of redemption soon after he was sworn in on 24th February 2017 with the unveiling of a blueprint he tagged: ‘Platforms for Change.’

He had subsequently identified the various ‘platforms’ his administration will invest on to change the outlook of the sunshine state to include job creation through agriculture, entrepreneurship and industrialization, massive infrastructural development and maintenance, provision of functional education and technological growth, provision of accessible and qualitative health care and social service delivery, rural development and community extension services.

Akeredolu pursued this agenda within the limitations of available resources and in spite of the humongous debts he inherited from his predecessor, Dr Rahman Olusegun Mimiko in his first four years which will end when he takes his oath of office on 24th February.

There are evidences of the successes he recorded in his first four years in every part of Ondo. Take for instance the N5 billion interchange bridge at Ore town, the headquarters of Odigbo Local Government Area of the State.

Ore has been popular over the years as a strategic terminus for commuters going from one part of the country to the other. The town is host to four junctions – one leading to Sagamu and Lagos in the West; Benin, Niger Delta and the East as well as the state capital Akure, and the entire northern part of the state with southern and coastal areas of Ondo.

While this has made the town popular as a commercial centre over the years, the downside was the perennial gridlock with commuters spending hours in heavy traffic, especially during Yuletide seasons.

This was in addition to frequent loss of lives at the different junctions as a result of reckless driving and lack of patience by drivers.

But the nightmarish experience of commuters has become a thing of the past with the completion of the ‘Freedom Bridge’ at Ore by the Akeredolu government. The fly-over bridge, which is first of its kind in the state has not only helped to put an end to unnecessary carnages, but has also helped to enhance the aesthetic outlook of the city.

The reduction of gridlock as a result of new interchange is also boosting economic activities in the town described by President Muhammadu Buhari as ‘a mini-Nigeria’ because of the presence of almost all ethnic groups in Nigeria within its territory.

Also deserving of mention is the intervention of Arakunrin in the construction of the hilly Oke Alabojuto road in lkare-Akoko area of Ondo State.

The dangerously steep road shortly before the popular Oja Oba market had claimed lives of traders, commuters among others as drivers of articulated vehicles, lorries and even smaller ones usually lose control of their vehicles when ascending or descending the hill.

Their vehicles usually rolled back, crashing and crushing traders in the market. But Akeredolu ended the needless deaths when he levelled the hilly road and convert the road to dual carriage way to the surprise of many who had thought that such feat was not possible.

Just like he did with construction of the township roads which has changed the face of Akure, the state’s capital, Akeredolu’s intervention in Akoko land has also led to most roads in the area being tarred.

In Ore, the Industrial Park located at Omotoso part of the town which was flagged off alongside the interchange is now in full operation, employing thousands of youths in the area.

The Industrial park, a product of Public-Private Partnership (PPP) between Ondo State government and Hessmac Industry Limited, was established on a massive 1,000 hectares of eco-friendly, economic and industrially zoned land and is running on 30MW trio-fuel Independent Power Plant.

Located in the Industrial Park are the first ever Medium Density Fibre (MDF) Factory in Nigeria as well as the biggest cassava to ethanol factory in Nigeria, thus helping the country reduce the amount it spent on importing the two products.

There is also the benefit of technology transfer to Nigerians through the new companies. And as part of his efforts to industrialise the state, the Akeredolu administration is also creating jobs through revival of companies that have been left to rot away by previous governments through the Ondo state Development and Investment Promotion Agency.

Of course, the Governor’s investment in development of infrastructures, especially roads is also boosting social economic activities across the state.

In his first term, Akeredolu also created many jobs through his prioritisation of investments in the agricultural sector. His administration bought and distributed about 26 tractors to farmers across the state to enhance agricultural production.

In addition, he ensured that the state’s portion of funds for joint- funded agricultural project/programme that will benefit the people are paid promptly with the Fadama initiative being a major beneficiary of government’s efforts in this regard.

Through its Ondo State Agric-business and Empowerment Centre, the government also encouraged youths in the state to take interest in the agricultural sector as a viable sector for employment.

Top among the initiatives of Akeredolu’s government in the sector include the establishment of 2,000 hectares cocoa plantation at Ujugbere in Owo Local Government Area for allocation to interested at four hectares per person for ownership and maintenance, provision of an E-extension service provision to all actors along the value chains of agricultural commodities in the state and rehabilitation of the 1,744 hectares Oda Road farm that has now been shared to croppers for proper management.

In the same vein, modern four Bee’s Hives were built at Eyimore; 100 ponds for aquaculture were established while 600 youth were trained for tomatoes production and 100,000 capacity pen boiler was kicked started in Usuada.

In all over 7,000 youths were trained in agric business as a result of these venture designed to create jobs, reduce hunger and boost wealth creation.

The Sunshine Cocoa Factory at Alade-Idanre is also running under a Public-Private-Partnership arrangement while a semi-mechanised abattoir meat processing factory in Akure is also working.

The learning environment in state owned primary school has become more friendly and conducive with over 840 primary schools renovated and equipped with modern and functional toilets in the first four years of Akeredolu in office.

Akeredolu also prioritized welfare of civil servants by ensuring regular promotion, even while also doing its best to ensure regular payment of salaries in his first four years.

Of course, the role he played in ensuring successful establishment of the Amotekun security initiative in Ondo and the Southwest in general is a well-known fact to all Nigerians.

Even as his first term is winding up, he has added 20 Hilux trucks to the fleet of Amotekun corps in response to the emerging security challenge in the state.

To firm up security of the state, the Governor in his first four year in office donated over 50 Hilux trucks and 100 motorcycles to different security outfits, namely, the Nigerian Army, Navy, Police and the Civil Defence.

The Governor had already pledge to consolidate on these achievements in his second term. Akeredolu has said he will continue his aggressive pursuit of job creation through industrialization and provision of infrastructure throughout the state as part of his plans to ensure that Ondo reliance on oil revenue is reduced to barest minimum.

Top among his plans include ensuring that the all towns and villages in the Ondo South Senatorial District are reconnected back to the national grid, building of a port in the Southern part of the state and ensuring the takeoff of the Sunhine Egg Powder Company currently being constructed at Emure-Ile, Owo designed to employ at least 5,000 people.

He has already completed 200 out of the 400 kilometers of road network being constructed across the state and he has promised to complete the remaining 200 kilometres.

Listed among his priorities for second term is the completion of ongoing dualisation of Ikare-Akoko township roads and actualization of Araromi in Ilaje to Lekki in Lagos coastal road.

Akeredolu’s first term scorecard certainly a very bright one and the Governor has promised that he won’t be sleeping in the next four years either. Surely, Akeredolu will consolidate on his redemption of Ondo in his second term and should be supported.

. Oladimeji, a Senior Special Assistant on Publications to the Ondo State Governor writes from Akure 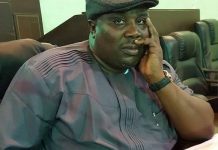 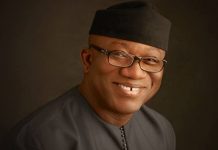 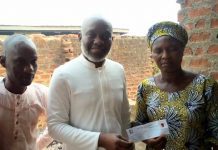 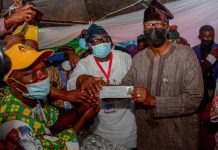