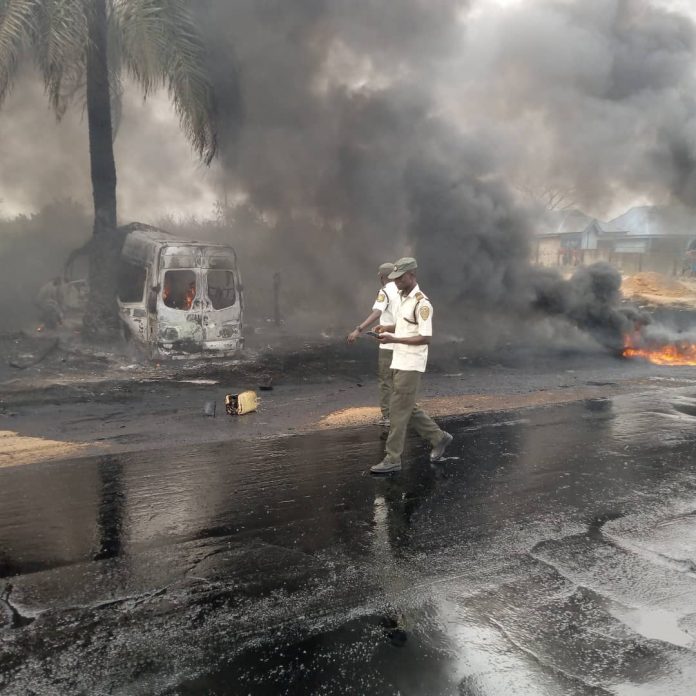 Almost 48 hours after a tanker driver got burnt when the vehicle he was driving fell and exploded, four persons were reportedly burnt to death in another accident on Sunday on the same Atoyo axis, Ogbere along Ijebu Ode-Benin Expressway.

The four victims were said to among 14 passengers in a GIG commercial bus whose driver drove the vehicle into a slippery section of the road, caused by black oil leakage from a tanker, which forced the bus driver to lose control of the vehicle and it swerved into the bush hitting a tree before it burst into flames.

The Public Relations Officer of the Ogun State Traffic Compliance and Enforcement Corps, Mr Babatunde Akinbiyi, said the accident occurred around 11.50am.

He said the remaining 10 of the passengers who survived had left the scene before the operatives of the TRACE arrived.

He said according to an eyewitness account, “a tanker loaded with black oil inbound Benin on the Ijebu Ode-Benin Expressway, spilled its content on the road due to a leakage from the tanker and had to stop when the attention of the driver was called by other drivers driving in the same direction.”

He added that “when TRACE, Federal Road Safety Corps and the police got to the scene, they had to divert and re-route traffic, so that inbound traffic to Benin can join the outbound traffic section because it’s not safe for vehicles going inbound to drive on the black oil which has covered the length and breadth of the section.” 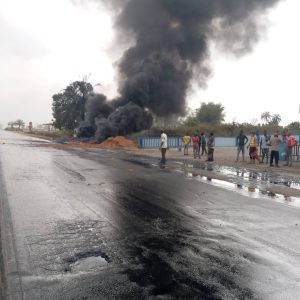 He added, however, that the driver of the commercial bus disobeyed the warning at the diversion point and chose to drive on the black oil, damning the consequences.

He said the whereabouts of the remaining 10 could not be ascertained as at the time of filing this report, because they had left the scene before operatives of TRACE arrived.

Akinbiyi said the Ogbere Divisional Police Command has taken over the case, while the driver of the tanker loaded with black oil is in the custody of the police.

TRACE again called on drivers, particularly, commercial vehicle drivers to cooperate and show understanding with traffic managers so as to make to the road safe for all road users.