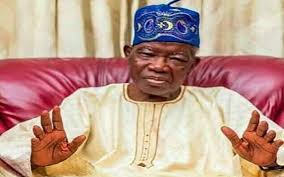 He said this in his condolence letter to the wife of the late first civilian governor, Alhaja Abimbola on Thursday, copy which was made to journalists through his Media Assistant, Kehinde Akinyemi, in Abeokuta.

Obasanjo said the late Jakande deserved all accolades poured on him over his death.

The first civilian governor of Lagos died in Lagos on Thursday at the age of 91.

Obasanjo who went down memory lane on the pen profession of the late governor, stated that his success catapulted him to the height he got to in public office.

The letter read in part: “He served this nation principally through journalism and through newspaper management before becoming an active politician.

“It must not be forgotten that he served as an Editor-in-Chief of the Nigerian Tribune at a stage in his career where he acquitted himself as a positively-minded, focused and imaginative personality.

“Indeed, he steered the company to editorial credibility and profitability and this has remained a reference point in the history of the organisation till today.

“It is with similar verve and energy that he pursued his work at John West Publications which was established by him to publish The Lagos News.

“He was a master of the craft of column-writing. He also helped in the professional re-orientation of the younger generation of journalists in all the media organisations he had found himself.

“He would be remembered as a fine journalist and one that was greatly admired by the general public and his peers as a straight-forward and complete gentleman majorly.”

Obasanjo said at 91, Alhaji Jakande attained the status of a venerable elder whose death must, by convention and our culture, ordinarily be the occasion of celebration and thanksgiving.

“But by no measure can he be described as an ordinary man. He was, by all measure, a great man, an ardent patriot, a frontline journalist, an astute politician and reputable administrator, a profile earned over the last five decades. “