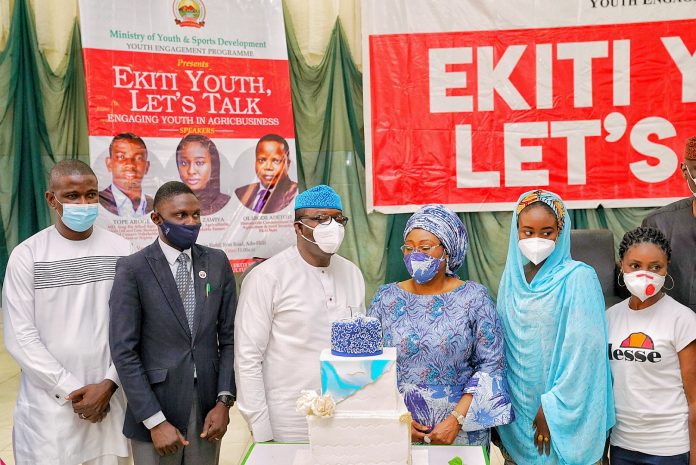 Fayemi said the ventures, when fully operational, would provide jobs for more than 500,000 Ekiti people, both directly and indirectly, adding that these were parts of efforts aimed at transforming the state from being a civil servant economy to an agric-based industrialised economy.

Fayemi who presented a paper and sat through one of the sessions, also cut his birthday cake with young Ekiti entrepreneurs at the event, which was also attended by his wife and some top government officials.

He explained that the farm settlements and farm centres “have been repositioned for massive harvest and processing, in order to feed the cargo airport upon completion so that Ekiti will become food basket in Nigeria and net exporter of semi-finished farm produce and products.”

Fayemi who highlighted some programmes and policies of the government that had created opportunities for youth in commercial agriculture, urged the youth to embrace agriculture with an assurance that his administration would continue to provide additional impetus that would make agribusiness attractive and lucrative in the state.

Describing Ekiti youth as hardworking, Fayemi stressed the need for young and energetic youth to venture into agriculture to diversify the national economy.

He said government’s efforts and youth engagement in agribusiness could assist the nation in closing the food deficit gap of over 3 trillion naira recorded between 2006 and 2019 in the country.

“It is my pleasure to be in your midst today to interact with you on how and why you should involve in Agribusiness. I am also delighted to be with you today, as it affords me the opportunity of celebrating my 56th birthday with the youths -our future”.

“In our continued quest to boost agriculture in Ekiti State and make it attractive to our teeming people, we opened up the Agribusiness space under public private partnership to bring investors in the area of large scale commercial farming. Some of the investors are JMK foods, Ibis Authority Rice Mill Ltd, Dangote Rice, Stallion Rice, FMS farms, Promise point and Dairy Farms and Processing by Promasidor Nigeria.

“Because of our friendly policies and programmes, Egbeja snail village which is the second biggest snail farms in Africa is now in Ekiti State with a view to extracting slime for export.

“Other new investors are: Truvis Agric Ltd for Ginger farming, Farm Crowdy/ Chodchod for maize and ginger, Ellah Lakes for oil palm and cassava, Nosak the biggest crude ethanol producer in Nigeria will be processing cassava to ethanol, OMOLUABI Farms for rice and cattle ranch, value ingredients for cashew, cocoa and plantain production and processing, Oodua Investment/ Farming Nigeria Ltd for poultry, cattle ranching, farm credit poised to provide finance for agriculture enterprises, all these put together has brought in value more than $200 million investment to Ekiti State.

“The high investment drives to our dear State is as a result of the ‘ease of doing business’ policy of the state government which covered availability to both cleared and un-cleared land across the State in the excess of 40,000 hectares when put together.

“Without doubt, when these companies are fully in operations, they will provide jobs for more than 500,000 Ekiti people both directly and indirectly. Our focus is to change the narrative of being called a civil servant economy to an Agric-based industrialized economy,” governor said.

The Governor said the rehabilitation of Ero Dam, Egbe Dam, Ureje Dam and Itapaji Dam was to support irrigation during the dry season.

He explained that Youth in Commercial Agriculture Development introduced during his first term in office was being re-established with the release of the state processing plant and 186 hectares of land for primary Agric production in the state.

The elated youth, many of whom also made presentations at the event, as well as the resource persons sang birthday song for Governor Fayemi while they joined in the cutting of the cake. 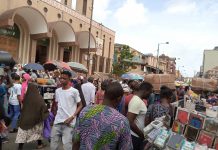 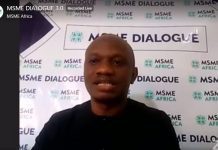 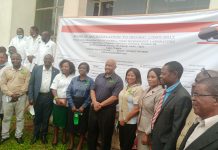