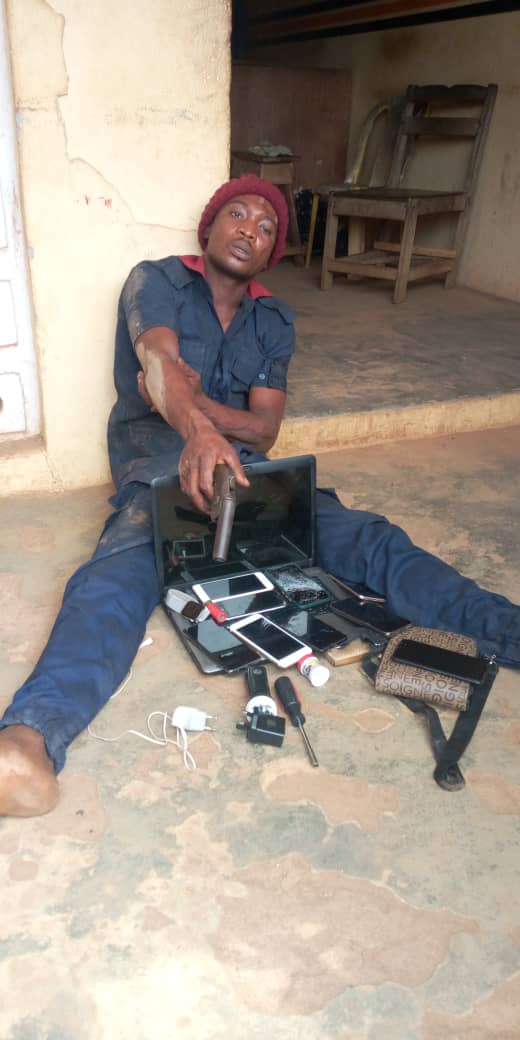 The police said the suspect, who has been using Nigeria Security and Civil Defence Corps uniform to carry out his robbery operations was apprehended on the 5th of February 2021.

The state Police Public Relations Officer, Abimbola Oyeyemi,said the suspect was arrested following a complaint lodged at the Ayetoro Area Command by some students of Olabisi Onabanjo University, Ayetoro campus.

He said the students had reported that they were robbed of their belongings such as phones and laptop at gunpoint by an armed robber, who broke into their apartment, dressed in Civil Defence uniform.

He said, “After hours of painstaking investigation, the detectives received information about the hideout of the suspect.

“On getting there, a bag containing six phones, one laptop, a pair of civil defence uniform and a locally- made pistol was found.”

Oyeyemi added that upon the discovery, the detectives mounted surveillance in the area and at about 5pm, the suspect sneaked into the uncompleted building, which is the hideout and moved straight to where the bag was kept.

He said the suspect was quickly rounded up and brought to the station, adding that two other stolen phones and a wrist watch were also found on him.

Oyeyemi said the complainants were sent for, and they all identified him as the person who robbed them.

He said investigations further revealed that the suspect stole the pair of civil defence uniform from a parked Toyota Camry belonging to an officer of the corp on December 2020 and thereafter set the car ablaze. The officer has also identified the uniform as his own.

Meanwhile, the Commissioner of Police, Edward Ajogun has ordered the immediate transfer of the suspect to the State Criminal Investigation and Intelligence Department for discreet investigation and diligent prosecution.