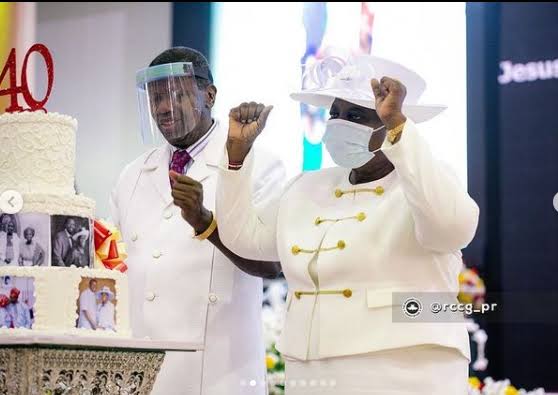 The General Overseer, Redeemed Christian Church of God, Pastor Enoch Adeboye on Sunday said things were tough when he became the head of the church 40 years ago.

He said this during the 40th Thanksgiving Service with the theme: ‘Sunrise.’

He, however added that God Has remained faithful and He saw him through, making the church to grow in leaps and bounds.

Pastor Adeboye said the first challenge was paying the staff salaries and even having something for the upkeep of the church and the GO.

He said, “If you are traveling on a journey you have never travelled before, you need guidance. At the beginning, things were tough we had about 39 staff and we had to pray and fast to be able to pay their salaries, by the end of the month, nothing was left for the General Overseer.

“Thank God my wife was still working so you know who was feeding who. I sold my car. I applied for my gratuity from the government and they paid me, it was big money, l was happy, at least it will keep me going for a while and all of a sudden it occured to me that l am under a new management so l asked God what to do with the money,

The revered cleric said since that time, God Has remained his source.

He added, “When you see me today and you envy me, you need to know my source. I decree that the One who is my source will be your source also.

“I began to cry to Him when my wife and children were coming to be with me, l cried for a boy’s quarter. He spoke to me, He said ‘son, don’t ask me for a house because l have decided to build you a city’. That is what He said. When l told those close to me then, they laughed.

“Today there is one little place called Redemption Camp, it is bigger than some villages l know, it has its own water, power, school, e.t.c from one room to this.

“I decree to those of you who are small now, in the Name of the One who called me, you will be bigger than you think.”

Pastor Adeboye also commended his wife(Mummy GO), Pastor Folu Adeboye, for her support, as he would not have been this successful in the ministry without her support.