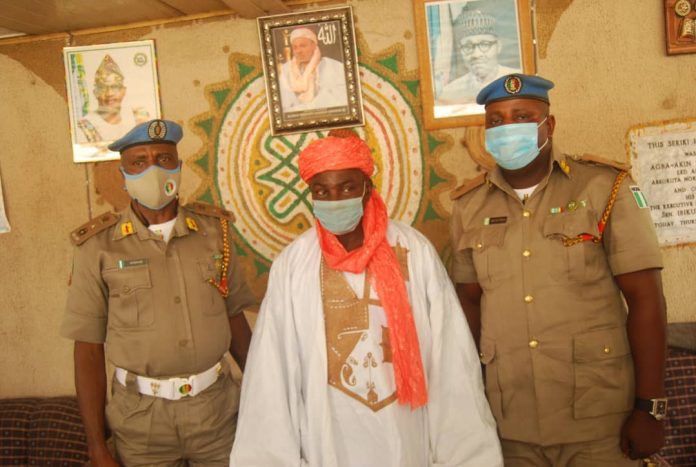 Officers of the Peace Corps of Nigeria have initiated a move to stop the spread of the farmers/ herders crisis and the unrest in some states in South-West geo-political zone of the country by visiting stakeholders to preach peace and dialogue.

They said this move would prevent the crisis from degenerating into a full blown violence across the country.

This move was led by the Deputy National Commandant of the Corps in charge of General Duties and Intelligence, Patriot Micheal Oyemike and the the Ogun State Commandant, Olufemi Akinyemi.

They took the campaign to the Palace of the Sarki Hausa in Egbaland and the Vice-Chairman of the Hausa/Fulani Community in Ogun State.

Speaking about the significance of the visit, the Deputy National Commandant noted that as peacemen, officers of the Corps were always at the forefront of finding peace and identifying potential threats to national peace and security.

He added that Peace Corps officers had been trained to be solution providers and they were achieving positive results through dialogue, mediation and alternative dispute resolution.

Oyemike said, “Our mission here is to preach. Peace corps, our constituency is within the youth and when there is crisis, the people who suffer it the most are the youth, it is still the youth that are being used for violent act.

“Now we need to preach the importance of dialogue, yes you can’t avoid crisis in to to. If we make attempt at dialogue, first we will see that some of the resources we use for after war, can be put for good use.

“What we are preaching now is the place for peaceful dialogue, so that we can use dialogue to achieve that which violence cannot achieve.

Oyemike added that the essence of visiting these leaders was because they are the heads of both the Hausa and Fulani constituency in Ogun State, and they in turn could talk to their people for peaceful co-existence. 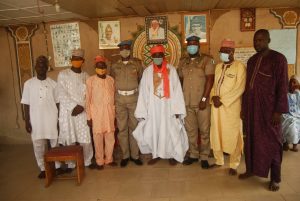 On his part, the Commandant of the Corps in Ogun state, Patriot Olufemi Akinyemi assured the Hausa/Fulani community of better relationship, noting that the Corps “is in touch with other major stakeholders in Southwest and beyond.”

He said the Corps in Ogun State “is working seriously to compliment the good gesture of the state government.”

He also urged the Hausa/fulani community to continue to educate their people about the presence of the second wave of Covid-19 in Nigeria.

The meeting was attended by representatives of Fulani Community, Miyetti-Allah cattle breeders Association, Market heads and chiefs and other notable leaders in the Hausa Community in Ogun State.

In his response, the Sarki Hausa of Egbaland, Alhaji Ibraheem Hassan Hassan Commended the leadership of Peace Corps of Nigeria for the move and for what he called ‘useful suggestions’.

High point of the event was the donation and presentation of packs of nosemasks and hand sanizers to the Hausa/Fulani Community in order to reduce the spread of COVID-19 among them.