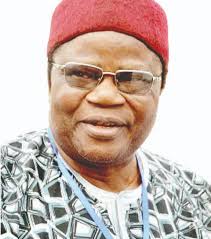 Ekiti State Governor, Dr. Kayode Fayemi has mourned the death of a former Minister of Information and frontline leader in the All Progressives Congress, Prince Tony Momoh; who passed on Monday, aged 81; describing it as a great loss to the country.

This tribute was contained in a statement signed by his Chief Press Secretary, Yinka Oyebode, and made available to our correspondent.

Fayemi described the late Momoh as a prince of many parts who started his career as a journalist at the Daily Times, rose to the position of Editor and later General Manger of the newspaper, before serving as Minister of Information.

He said the late elder statesman excelled in all his professional endeavours and  made remarkable impact when he eventually embraced partisan politics, becoming the national Chairman of the Congress for Progressive Change, one of the major political parties that metamorphosed into  APC, and as a respected leader of the APC and a major supporter of the government till he breathed his last.

Governor Fayemi said the late Prince Momoh was a journalist whose life was worthy of emulation as he firmly held the view that the media has the responsibility to hold the government accountable at all times.

The Chairman of the Nigeria Governors’ Forum said the former Minister was a man of honour and distinction with impeccable reputation for standing firm in the face of intimidation, especially during the struggle for press freedom.

Fayemi said Momoh, a Prince of Auchi,  was an unrepentant advocate of restructuring as he had constantly maintained that power must be decongested from the centre; adding that he was never shy of airing his views about national discourse regardless of whose ox was gored.

While stating that Momoh’s death amount to a departure of one of the nation’s shining lights, the Governor said the late Momoh would be sorely missed for his brilliance, forthrightness and great contributions to national development.

“Prince Momoh would be remembered for so many distinguished roles he played both in his chosen career and in nation building.

“On behalf of the Government and good people of Ekiti State, I commiserate with his immediate family members, the people of Auchi as well as the government and the people of Edo State, and prayed God to grant the family the fortitude to bear the great loss.”, he added.