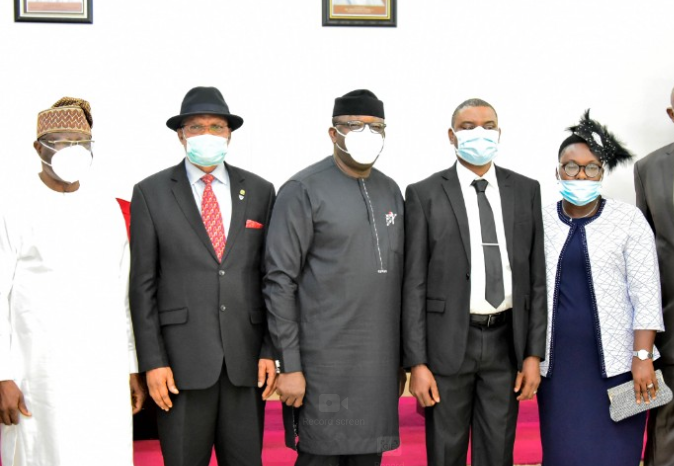 Ekiti State Governor, Dr. Kayode Fayemi has canvassed the elevation of qualified female lawyers as well as young lawyers as judges in the state High Court.

He made this call in Ado-Ekiti on Tuesday during the inauguration of the Permanent Secretary, Bureau of Chieftaincy Affairs, Adeniyi Familoni who is a barrister as a judge of the State High Court, following his recommendation by the National Judicial Council.

The Governor, while giving his perspective on the future of the state Judiciary said it was important to encourage and provide space for competent female lawyers to  become high court judges.

“My administration is committed to supporting the elevation of judges in our State high court. Directly related to this must now be the conversation on the desirability of ensuring that qualified young lawyers are given the opportunity to be appointed to the bench, “he said.

“History revealed that the late Justice Olatawura became the Judge of the Western State Court at the age of 38. So, it was not a surprise that he eventually ended up in the Supreme Court of Nigeria.

“It may now be desirable to revisit the age of the appointment to the bench. I am aware that in a number of State, efforts were made to target suitable candidate under the age of 40.

“No less important is the need for female judges in the High Court of Ekiti State. My administration firmly believes in the desirability of enabling appropriate environment for the appointment of women to decision-making positions.

“Our current situation cannot be said to be satisfactory and hope my Lord the Chief Judge will agree with me on the need to ensure that qualified female lawyers are given the space to aspire for the bench of High Court of Ekiti State, “he added.

Dr Fayemi, while swearing in the new judge, at the Conference Hall of the Governor’s Office, pledged to provide necessary support that would enhance the dispensation and administration of justice in the State.

He described the appointment of Barrister Familoni as a practical demonstration of his administration’s commitment to restoring the values of hard work, decency, integrity and competence above mediocrity in making appointment to leadership positions in the public service.

He said: “This is one appointment that has been adjudged as very well made. I have been pleased at the broad consensus that Adeniyi Familoni is well placed to receive the mantle of Ekiti State High court. Many who do not know me directly have sent me messages from outside Ekiti State commending this appointment.

“His appointment is another step forward in a remarkable career that has seen him repeatedly excel in new roles, recognised by awards, promotion and prestigious appointment.

“I have no hesitation in saying that he will be a tremendous asset to the High Court of Ekiti State and I wish him the very best for what I am sure will be a very long and very distinguished career on the bench.”

Dr. Fayemi charged the newly appointed judge to share the vision of his administration in providing fair and equal access to justice regardless of gender, ethnic origin, economic status and other social indices.