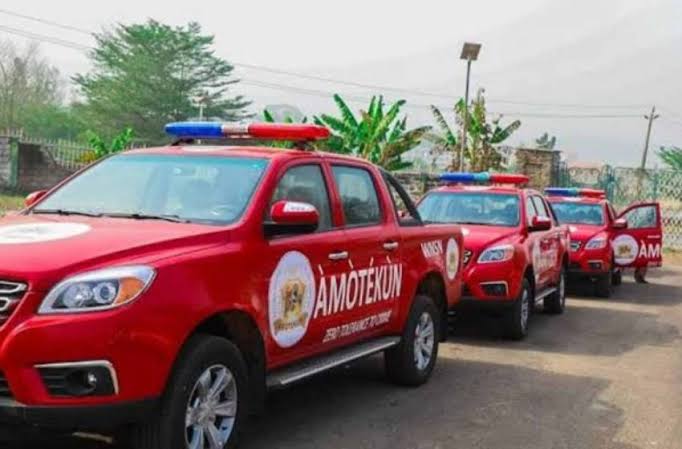 The Amotekun Corps, a local security outfit also known as the Oyo State Security Network, has said it seized no fewer than eight sacks of dangerous weapons, including amulets and charms from bandits and kidnappers within the forests across Oyo State.

The state Chairman of Amotekun Corps, Gen. Kunle Togun (retd.), disclosed this on Tuesday in Ibadan after the successful operation.

He explained that the Corps carried out the raid in collaboration with the local hunters under the aegis of Hunters Association of Nigeria, that made the navigation of the forest easy.

Togun said the team was able to disarm the foreign bandits, who were armed with guns, poisoned arrows, poisoned machetes, knives and dangerous amulets in the forests.

He noted that with haul of weapons seized, the Amotekun corps had recorded a breakthrough in ridding the forests of bandits and kidnappers that were unleashing terror on people in terms of banditry and kidnapping.

Togun said, “We have made success of arresting these bandits and disarming them through the support that we got from the Oyo State chapter of the Hunters Association of Nigeria.

“The hunters know the terrain and have the spiritual power to disarm these foreign bandits. That was why we sought their collaboration.

“As I am talking to you, we have a seizure of about eight sacks filled with poisoned cutlasses, arrows, daggers and amulets, which were to be used for the dangerous operations.

“We will not relent in our efforts in flushing out these criminal-minded foreigners. If they cannot peacefully contribute to the development of Nigeria’s economy, they have the liberty to relocate to their countries or any other country that allows their recklessness.”