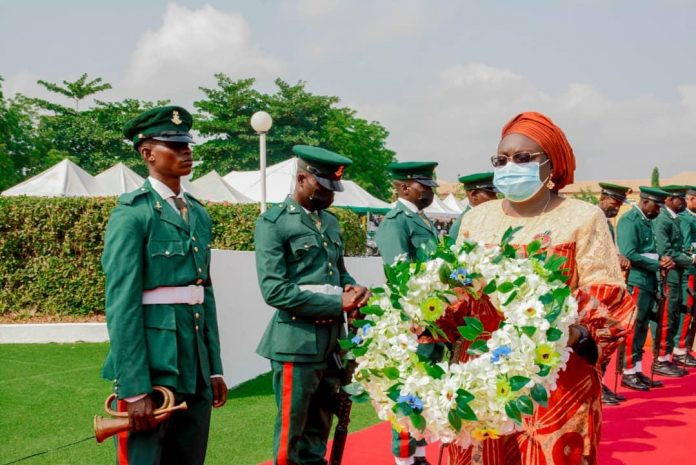 Ogun State Governor, Prince Dapo Abiodun, has once more called on Nigerians, especially well-meaning individuals, corporate bodies and other organisations to give support towards caring for the dependants of the nation’s fallen heroes.

He made this appeal on Friday during the commemoration of this year’s Armed Forces Rememberance Day held at the Arcade Ground, Oke Mosan, Abeokuta.

The Governor who was represented by his deputy, Mrs Noimot Salako-Oyedele said even the soldiers who also still alive fighting the insurgents equally deserved to be supported and cared for.

He noted that this would strengthened the bond between the civilian and the military in this Democratic dispensation.

“I appeal to individuals, corporate bodies and organisations to rise up to the challenge of giving support towards caring for the injured and the families of the dead by donating generously,” he said. 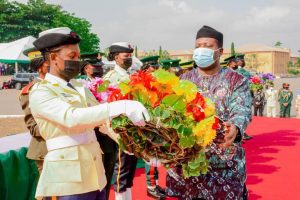 “Nigeria and Nigerians should contribute our quota towards the upkeep and welfare of our fighting men and their dependants.

“Our empathies and generous disposition towards them would help in engendering the much desired symbiotic relationship and synergy between the civilian populace and the military in furthering the cause of democratic development in our polity.

“Indeed, our support will symbolise a measure of gratitude.”

Abiodun reminded Nigerians of the need to work together for the continued peace, unity and development of the country, irrespective of their socio-cultural and political differences.

He noted that though language and religious leaning might differ, Nigerians should show love to one another, “as in our diversity lies our strength.”

He said “At this point, permit me to use this opportunity to remind all Nigerians, that irrespective of our differences, we must work together for the continued unity and development of our dear nation. 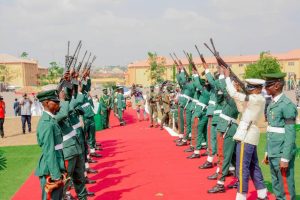 “We have no other place to call home. And, if there is a major take-away we should all have from this important event, it is that we should all embody the spirit of selflessness and sacrifice for our nation, so that our dear country continues on the path of greatness as envisioned by the founding fathers.

“As a matter of fact, we must shun the call for division, insurgence, banditry and all inter-ethnic, religious and politically motivated wrangling. We should embrace team-spirit, brotherliness and compassion for our fellow beings.

The Governor added that despite the COVID-19 and other global challenges, the Armed Forces had continued to be at the vanguard of the battle against the pandemic and ensuring the internal security by curtailing the activities of the insurgents in many parts of the country.

Governor Abiodun said the Remembrance Day was a good opportunity to recollect and reflect on the dogged spirit and the personal sacrifices rendered by the fallen heroes, and the continued role of the Armed Forces in the unity and progress of the nation, adding that the Nigerian Military should be appreciated for its gallantry and loyal service to the country.

The event witnessed ceremonial march past by the military and the laying of the wreath by the representative of the Governor and the Speaker of the State House of Assembly, Olakunle Oluomo.