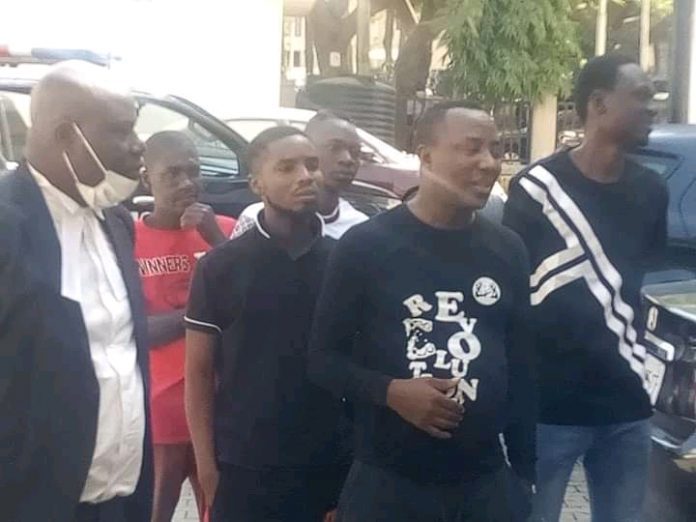 A Chief Magistrate’s Court sitting in Wuse Zone 2, Abuja has granted bail to the founder of Sahara Reporters, Omoyele Sowore in the sum of N20m, with two sureties, one of whom must be federal civil servant not below grade level 12.

Recall Sowore and four others were arrested and brutalised by armed policemen on crossover night, December 31, 2020, for allegedly holding a protest on New Year’s eve at Gudu junction in Abuja.

On Monday, January 4, he was arraigned alongside four others on a three-count charge bordering on conspiracy, unlawful assembly and incitement.

The court had then asked them to be remanded in custody.

While ruling on the bail application filed by their lawyer, Marshal Abubakar, on Monday, the Chief Magistrate, Mabel Segun-Bello, ruled that the sureties must reside in Abuja metropolis with landed properties and known addresses.

The court also granted bail of N1m and one surety in like sum to Peter Williams, Sanyaolu Juwon, Emmanuel Bulus and Damilare Adenola, who are standing trial with the human rights activist.

The court, however, asked Sowore to also physically report to the registrar of Federal Capital Territory High Court every Monday and Friday pending the determination of the case against him.

He is not expected to travel outside Abuja and the country.

The matter has been adjourned till February 5, 2021, for trial.

Sowore thanked Nigerians for their support while in detention, just as he assured them “that they would not give up until the country is finally and completely liberated.”