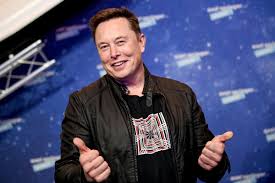 Musk is a major shareholder of the electric car company and has benefited from Tesla’s surging share price over the last year. CNBC estimated his wealth at $185 billion.

The distinction is the latest superlative for the South African-born Musk, who also leads the aerospace venture SpaceX.

Tesla is widely seen as a pacesetter for the car industry as conventional automakers try to catch up in electric autos.

Tesla had a strong 2020 as it ramped up production, broke ground on new factories and reported a series of profitable quarters and was added to the prestigious S&P 500 index.

That enabled shares to rise more than 700 percent during the year, making it more valuable that the world’s top carmakers combined.

Musk has hit a stride after stumbling in 2018, when US securities regulators required the Tesla chief to step down as chairman and pay $20 million to settle charges he defrauded investors with false claims on Twitter in August about a possible bid to take the company private, which was quickly aborted.

Musk also was embroiled in a messy public fight over his comments about a British caver, who had mocked the Tesla CEO’s offer of a mini-submarine to rescue young soccer players trapped in a cave in Thailand in the summer of 2018.

The caver, Vernon Unsworth, sued Musk after the Tesla chief called him “pedo guy” on social media, but a California jury in December 2019 ruled the remark was not defamation.

Musk put these controversies behind him last year as Tesla significantly boosted output at car factories in California and Shanghai and moved ahead to build new factories in Texas and Germany.

Tesla watchers do not think Musk will be able to match the massive valuation surge in 2021, but expect continued progress as the carmaker adds production capacity and pushes the envelope on new technologies, including autonomous autos.

Still, several analysts consider the stock to be overvalued, even if they praise the company.

“Tesla’s performance in 2020 was impressive, but not as impressive as the increase in its shares, which we continue to believe are overvalued,” said a note earlier this week from JPMorgan Chase, which has an “underweight” on the equity.

Musk holds about 21 percent of Tesla’s shares, according to a securities filing.