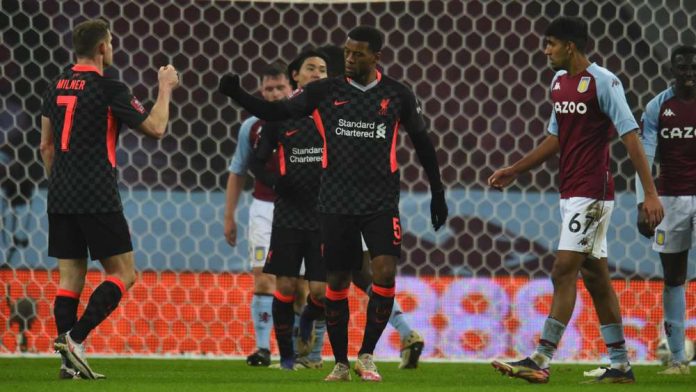 Liverpool FC survived a major scare from Aston Villa’s youngsters before claiming their place in the FA Cup fourth round with a 4-1 victory.

Forced to name a starting XI comprised entirely of players without a first-team appearance to their name as a result of a COVID-19 outbreak, the Villans produced a hugely impressive performance under the guidance of U23s boss Mark Delaney.

It was enough to see them deservedly level at the break, Louie Barry finishing off a well-worked move to cancel out Sadio Mane’s early header. 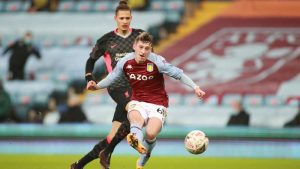 But Georginio Wijnaldum’s strike on the hour-mark served to break the kids’ resistance and was followed by further goals from Mane and Mohamed Salah that added gloss to the scoreline.

Villa would have been anticipating a long night ahead when Mane headed home Curtis Jones’ right-wing cross with just four minutes on the clock.

Only two great stops in quick succession from Akos Onodi stopped the Reds doubling their lead soon after, the young goalkeeper keeping out Fabinho’s low shot before rising to save Mane’s follow-up.

But, while they continued to dominate possession as the half wore on, Liverpool hardly had the Villa goal under siege, and they paid the price as the hosts made the most of their first real attack.

Callum Rowe did brilliantly to evade Jordan Henderson deep in midfield before sliding an inch-perfect pass through to Barry, who saw off the challenge of Rhys Williams and produced a composed one-on-one finish that belied his tender years.

Liverpool could not have expected to find themselves in such a battle at Villa Park but responded with renewed vigour following the restart.

The pressure finally told on the hour, Wijnaldum sidefooting home in space with tired Villa legs unable to close him down, and two further goals in the next five minutes put the game to bed.

The first came from Mane, who looped a header up and into the far corner, before Salah got in on the act with a low finish into the corner.