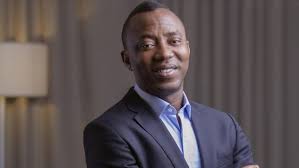 The founder of Sahara Reporters, and activist, Omoyele Sowore and four others were said to have been dragged before a Wuse Magistrate’s Court, Abuja on Monday.

They were said to have been arraigned on a three-count charge of criminal conspiracy, unlawful assembly and public disturbance.

A drama reportedly happened in the courtroom.