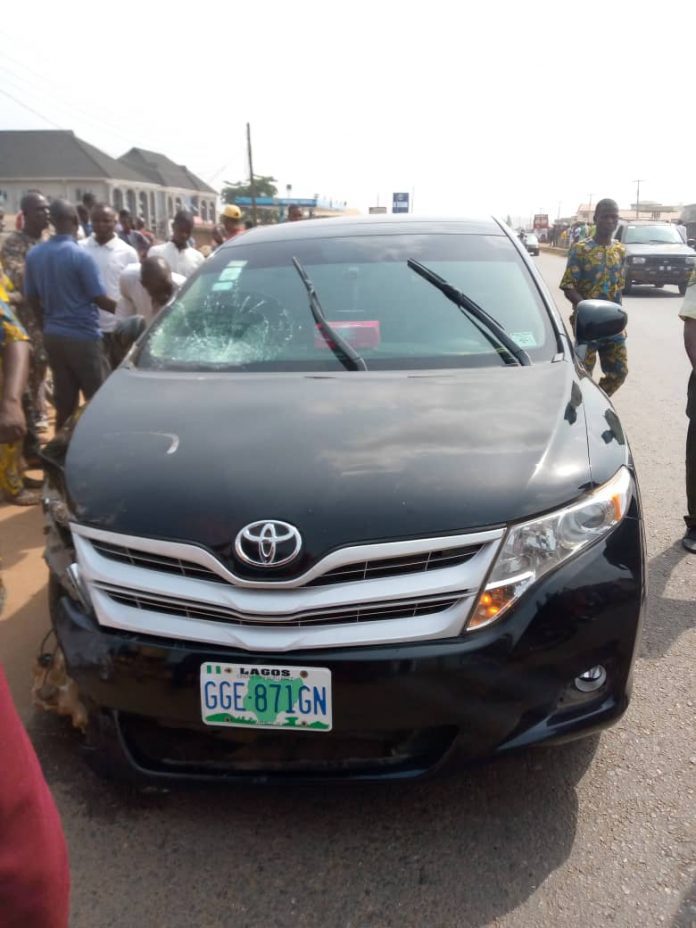 A motorcyclist whose identity has yet to be ascertained was crushed to death by a driver of a speeding Toyota Venza car around Rounder in Abeokuta.

Another victim was said to have been injured in the accident, which occurred opposite Royal gate filling station inward Rounder on Thursday.

According to the Public Relations Officer of the Ogun State Traffic Compliance and Enforcement Agency, Mr Babatunde Akinbiyi, the driver of the Toyota Venza with number plate GGE 871 GN hit the motorcyclist with the car, making him to hit his head on the road.

His motorcycle has the number plate KNN 389 VT.

Akinbiyi said the driver of the car fled the scene after the incident, as the mob wanted to set the car ablaze.

He said, “According to eyewitness account, learnt the okada rider and the motorist were coming from Lafenwa, inward Rounder when the crash happened.

“The driver of the vehicle in question, as a result of speeding, hit the motorcyclist by the side and the pillion rider fell down by his side with his head, which resulted in his untimely death.

“Unfortunately, the driver of the vehicle escaped but for timely intervention of TRACE officials, the vehicle would have been burnt by an angry mob.”

Akinbiyi added that the vehicle has been taken to Lafenwa Police Station, while the corpse of the motorcyclist body has been deposited at the morgue of the General Hospital Ijaiye, Abeokuta.

While TRACE Corps commiserate with the family of the deceased, motorists are also implored to please reduce their speed and give consideration to other road users.