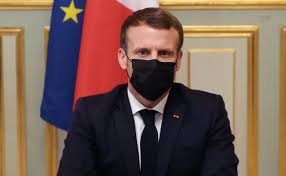 A statement from the Elysée Palace, indicated that the 42-year-old president took a test after symptoms appeared and will now be in self isolation for seven days.

“The President of the Republic has been diagnosed positive for Covid-19 today,” the Elysée said on Thursday morning. The diagnosis was made following a “test performed at the onset of the first symptoms”, the statement added.

Report indicated that it was yet unclear how he contacted the virus, but contact tracing had commenced with those he had contact with.

However, an official said, “Mr Macron is still in charge of running the country and will work remotely.”

The statement was silent on whether Macron’s wife Brigitte, who is 67, had also tested positive.

France had this week imposed an overnight curfew to help deal with rising cases of  infection there.

So far, a total of two million confirmed cases have been recorded in the country since the epidemic began.

Recall that the outgoing American Donald Trump had also tested positive for coronavirus in October but later overcame it through a cocktail of medications.

He spent three days in the hospital.

UK Prime Minister Boris Johnson also caught the virus and ended up in intensive care during the country’s first wave of the pandemic in March.