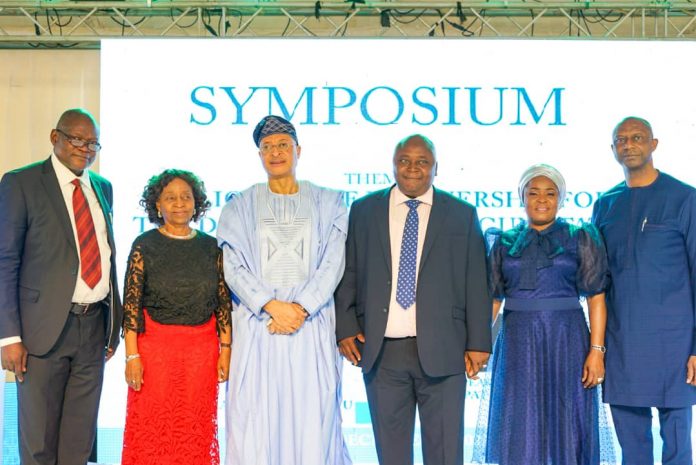 A former member of the House of Representatives, Oladipupo Adebutu has asked state and federal governments to explore the Public- Private Partnership option in lifting the economy out of the woods instead of external borrowing.

He gave this advice at a symposium organised in his honour as Lisa Aje of Egbaland, Abeokuta, Ogun State over the weekend.

He noted that this was the only way to create wealth, and not by borrowing.

The event which was chaired by Asiwaju Solomon Kayode Onafowokan, was themed: ‘Public Private Partnership for the Development of Ogun State.’

It was held at Park Inn by Radisson, Abeokuta.

The lawmaker said, “Government should adopt Public- Private Partnership instead of borrowing from abroad. For us to have wealth, we must have cooperation between the private sector and the government. We cannot have confrontation.

“Why should we go and mortgage our children’s future and borrow money. Why do you have to borrow money when somebody will bring his money and do what has to be done.”

The event was attended by a renowned Professor of Political Economy, Pat Utomi  who was the guest speaker, and other co-speakers such as Prof. Ishola Akintoye, and Prof. (Mrs) Teju Sodipo Somorin; and Dr. Biodun Adedipe.

Also at the event were the Ooni of Ife, His Imperial Majesty, Oba Adeyeye Enitan Ogunwusi; The Alake and Paramount Ruler of Egbaland, His Royal Majesty, Oba Adedotun Gbadebo; and many other traditional rulers, and chiefs across the state.

In his own presentation, Prof. Utomi attributed some of the factors responsible for low public -private partnership in Nigeria to failed institutions, lack of continuity in government, lack of trust and violation of contractual agreements by government officials.

He also echoed the need for governments at all levels to partner the private sector to build infrastructure towards socio-economic growth.

Utomi who is the founder of Centre for Value in Leadership said: “Even if government is to commit its entire budget for a whole year to infrastructure, it will only succeed in building few projects.”

He, however warned public office holders, especially state governors to be fully committed to contractual agreements with their private partners, blaming past leaders for squandering the commonwealth of the nation instead of saving for the future generation.

He said, “Our leaders lack the ability to recognise the place of discipline, commitment and integrity in development. During the period of oil boom, our leaders were busy spending lavishly instead of saving for the future. We have to be honest about why we have not succeeded in many things.

“Strong institutions are important for public private partnership for all kinds of things. Failure of our institutions has discouraged investors from investing in Nigeria.

“I think one of us here should really feel a deep sense of personal shame that our children are likely to have a quality of life worse than we had.

“In most societies, the basic questions people ask is, is your life better today than it was a few years ago. Every generation is expected to have a better life than the generation before.”

On his part, Ooni of Ife in his speech urged the Lisa Aje of Egbaland to justify the confidence reposed in him and to bring the needed business development to the Rock City

The monarch  prayed God to grant him the necessary wisdom and enablement to carry out the task.

The Alake of Egbaland expressed confidence that Adebutu’s installation would bring further growth in the business sectors in the town and the whole of Ogun State.