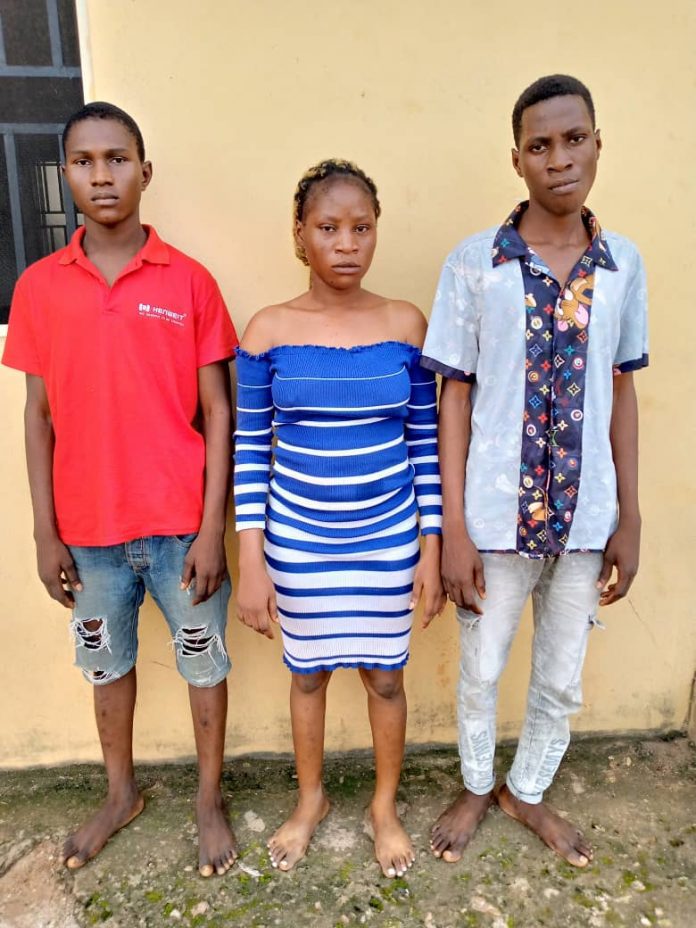 The men of the Ogun State Police Command say they have arrested two siblings and one other person for allegedly threatening to kidnap their former employer, Makinde Oluwatoyin’s son, Solomon.

The suspects are Oyeleke Blessing (23), David Oyeleke and Kabiru Oniyitan. The police said they had a plan to kidnap Solomon at the school he attends.

According to the state Police Public Relations, Officer Abimbola Oyeyemi, the suspects were arrested on Tuesday 8th of December 2020, through technical intelligence.

He said the suspects demanded N2m ransom from Makinde, who is the Managing Director of Percy Company, Ota, through a telephone call to his line from an anonymous caller.

Oyeyemi said they equally threatened to waste his whole family if he failed to pay the money within three days.

He stated further that the caller described the school the child attends and the location of his residence which suggested that he has been under their surveillance for some time.

He said,”However, upon the report of the threat, the Dvisional Police Officer, Onipanu Division, Bamidele Job, detailed detectives to embark on intelligence and technical-based investigation.

“Their efforts paid off when one of them was traced to her hideout and was arrested with the phone which they were using to make calls to the man.

“Her arrest led to the subsequent arrest of her two other accomplices, while the remaining one is still at large.”

During interrogation, Oyeyemi said the suspects confessed to have jointly planned the crime, having worked in the man’s company before and knew his financial capacity.

Meanwhile, the state Commissioner of Police, Edward Ajogun has ordered the transfer of the case to Anti-Human Unit of the State Criminal Investigation and Intelligence Department for further investigation.