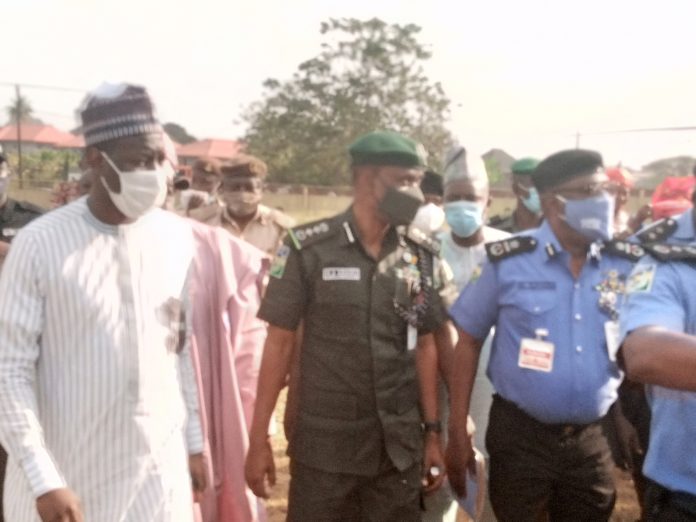 The officers and men of the Nigeria Police have been told not to be demoralised aftermath of the #ENDSARS protests but to continue to be courageous, civil and calm in discharging their responsibilities.

The Inspector-General of Police, Mohammed Adamu, said this on Thursday at the Ogun State Police Command headquarters, Eleweran, Abeokuta while addressing the officers and men of the command in continuation of his morale boosting visits to police formations across the country.

The IGP who was received by the Deputy Inspector-General of Police, South West, Leye Oyebade, Assistant Inspector-General Police Zone 2, Ilyasu Ahmed, said nobody else could replace the policemen, adding that they had to come out and perform their duties of protecting lives and property.

While he noted that no amount of intimidation could prevent them from performing these responsibilities, Adamu urged to perform their duties without fear or favour.

He said, “Nobody can demoralise us, nobody can prevent or make us shy away from performing our duties. The responsibility of protecting lives and property is given to the police and you are licensed to carry arms.

“We are encouraging you to go out there and perform your duties without fear or favour and without being afraid of any victimisation. Be courageous, be civil and be calm and follow the procedures in performing your duties.”

The IGP further said though the firearms they carry were to protect themselves, lives and property, they are constitutional allowed to use them where “when there is violent protest, or when individuals or group of people are unlawful, but not to kill only to maim.

He, however added that if in the process of performing their duties, a mistake occurred, and officers involved had followed all the necessary procedures, the police authorities shall support and ensure such officer was not molested.

Earlier in his address, the state Commissioner of Police, Edward Ajogun, said the visit of the IGP was timely as it would serve as a morale booster to his men.

He explained that for 16 days, starting from 8th till 24th October 2020, the state had its share of the #ENDSARS protests, which resulted in protesters blocking some roads within the state while some hoodlums extorted commuters and motorists in the process.

He lamented that a Divisional Crime Officer in Atan-Ota division, Augustine Ugbeche lost his life while the Divisional Police Officer,Sikiru Olugbenga was stabbed by protesters in the division while he was trying to calm them down.

He said seven police outposts in Ijebu Area and Iju-Ota were vandalised and Obada Oko were looted, Atan-Ota Divisional Headquarters and Idogo police post were burnt down.

Exhibited items and personal effects of officers were said to have ether be looted or destroyed.

The police commissioner, however thanked the governor, Prince Dapo Abiodun, traditional rulers in the state, most especially the paramount rulers,and sister security agencies for their support and working in synergy with the police in appealing to the protesters to be peaceful.

He said his men were back at their duty posts, and some criminals had been arrested after the protests.