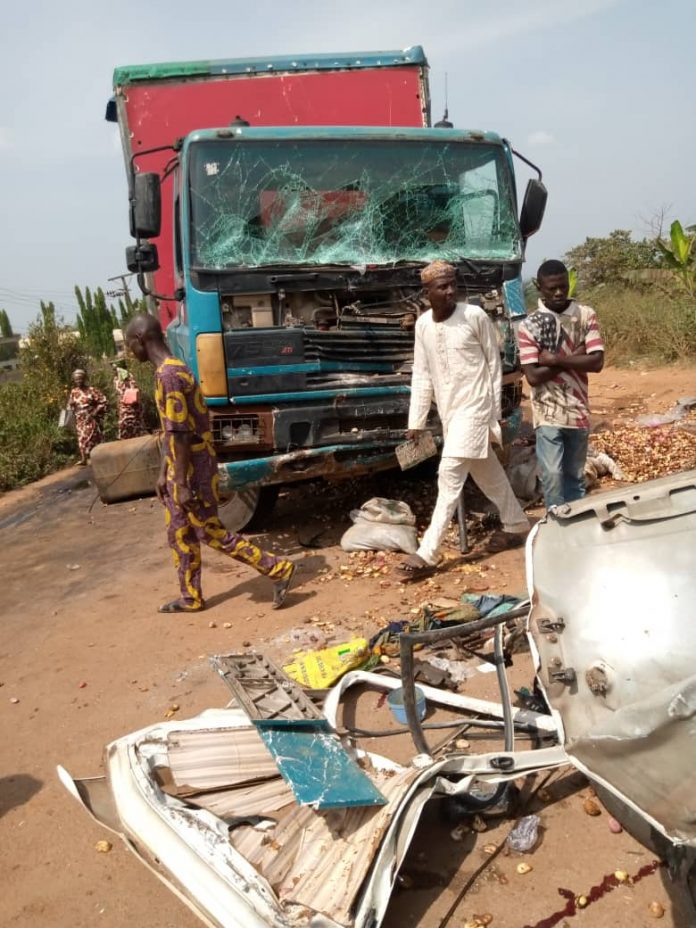 Four persons were said to have died when two others were reportedly injured in a road accident which occurred on Saturday along Ijebu Ode-Oru Road in Ogun State.

The accident occurred at 1.15pm opposite Capital Hotel,and it involved a DAF truck and a commercial bus laden with sacs of Kolanut.

Both vehicles were said to have no number plates.

According to the Public Relations Officer, Ogun State Traffic Compliance and Enforcement Agency, Mr Babatunde Akinbiyi, the driver of the DAF headed towards Ijebu Ode was speeding, lost control, causing the truck to veer off its lane and had an head-on collision with the commercial bus which had four passengers’ on board, on its way to Ibadan.

He said the driver and the passenger in the truck(two males) were injured while the driver(male) and the three passengers (females) in the commercial bus lost their lives on the spot.

Akinbiyi added that an angry mob had wanted to set the truck ablaze but were prevented due to the timely intervention of law enforcement agents.

Meanwhile, the corpses of the four victims had been deposited in the morgue at the Ijebu Ode General Hospital while injured were also receiving treatment in the same hospital.

While he said the accidented vehicles had been evacuated to Atan Divisional Police Command, he warned drivers of articulated vehicles against reckless and dangerous driving because of its attendant consequences.