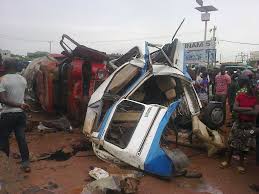 The Public Relations Officer, Ogun State Traffic Compliance and Enforcement Agency, Babatunde Akinbiyi, said this in a statement made available to our correspondent.

According to him, both vehicles were heading towards Lagos when the incident happened at Lotto, opposite NNPC filling station.

Akinbiyi said the truck laden with granite lost control and hit the Mazda bus from behind, making it to fall on its side.

He said the truck emptied its content on the bus as it also fell and killed three of the occupants instantly.

The remains of the casualties, he added, had been deposited in the morgue of Idera Hospital, Sagamu while the injured had been taken to another hospital by his relations.