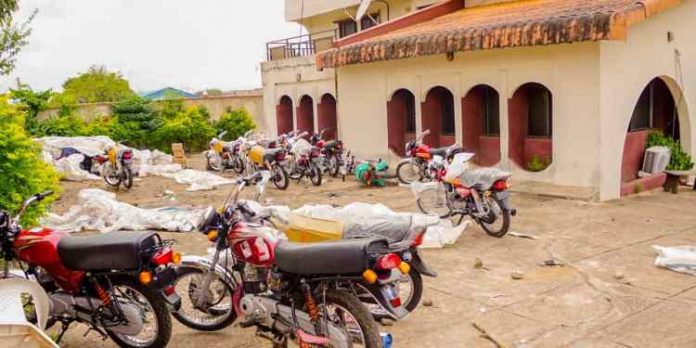 Scores of youths on Saturday invaded the Ibadan home of the lawmaker representing Oyo Central in the National Assembly, Senator Teslim Folarin, and carted away no fewer than 300 motorcycles, generators, and refrigerators among others.

Nobody could say how the mob got wind of the presence of the items in the lawmaker’s home, but some of youths could be seen riding away in excitement the motorcycles while some others push theirs, as they headed to different destinations.

However an aide to the lawmaker who declined to give his name  said the looted items which also includes grinding machines were meant for empowerment and they were worth about N250m.

Senator Folarin, is said to be outside the country at the moment.

The aide had said, “I can confirm to you that senator Folarin’s house in Oluyole estate area of Ibadan was invaded this morning by hoodlums.

“They took away items worth N250 million. It was daylight robbery. We could not engage them so they had a field day. The senator was not at the property when the looting happened. It is sad this is happening.”

Also in Cross River, the homes of  two senators, Ndoma Egba and Gershom Bassey, were reportedly vandalised and properties looted.

The gale of looting was also reported in other states such as Delta, Osun, Edo, Plateau, and Kwara among others.

Police used teargas canisters to disperse a mob attempting to break into the Arts and Culture Centre in the Garki District of the Federal Capital Territory, Abuja on Saturday where they suspected palliative packages were being kept.

In Ogun, protesters also laid siege to the Bishop’s Court at Onikolobo area of Abeokuta where they also suspected COVID-19 relief materials were stored, but there was nothing of such, as the Bishop had to do a video recording of the empty store, and put it in public domain.