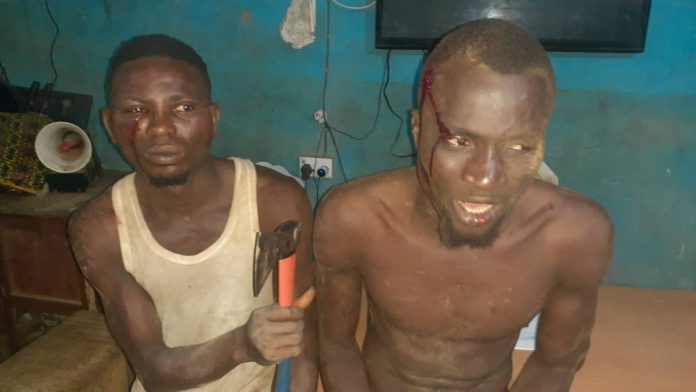 The Ogun State Police command says it has arrested two members of a notorious robbery syndicate terrorising Ogijo and its environs.

According to the state Police Public Relations Officer Abimbola Oyeyemi, the suspects were were nabbed on Sunday 18th of October 2020 while carrying out a robbery operation.

He gave the names of the suspects as The Olaitan Olushola a.k.a Toshiba and Oluwajuwon Balogun.

He said the Ogijo Divisional headquarters of the command got a distress call that the gang were operating at Malatori area of Ogijo where they were dispossessing residents of their valuables at gunpoint.

He added that the Divisional Police Officer, Ogijo Division, Muhammed Suleimon Baba, quickly led his men to the scene where the two of them were apprehended while others escaped with some of their weapons.

Oyeyemi listed items recovered from them as two battle axes.

He said two of their victims namely Idowu Kareem and Akinloye Raimi have identified the duo as members of the syndicate who dispossessed them of their phones at gunpoint.

Meanwhile, the state Commissioner of Police, Edward Ajogun has ordered the transfer of the suspects to the State Criminal Investigation and Intelligence Department, Eleweran, Abeokuta for discreet investigation.

The CP also directed that the fleeing members of the gang be hunted for and brought to book.