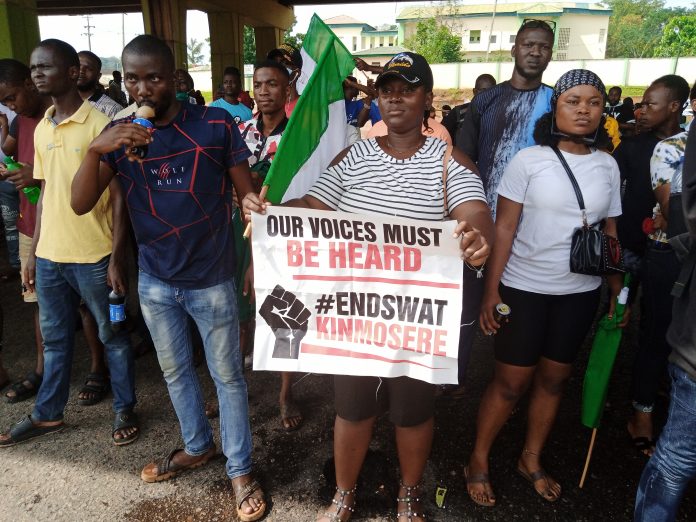 The major roads like the Lagos-Abeokuta Expressway, Abeokuta- Kobape-Siun-Sagamu Road, and the Lagos-Ibadan Expressway had blockades in strategic points.

For the Abeokuta- Kobape-Siun-Sagamu Road, major blockades were at NNPC junction and interchange section, while the most prominent blockade on the Lagos-Ibadan Expressway were located at the Arepo-Wawa axis, Berger area among others.

From 8am, the major road leading to the Ogun State Secretariat was blocked by the protesters at the NNPC junction, which made some of the civil servants to park their cars at the adjoining streets around the road, and took commercial motorcycles popularly known as Okada to their offices.

Other residents who could not afford the luxury of taking Okada had to complete their journey on foot.

Those travellers inward and outward Abeokuta who were caught up in the melee had to make use of alternative routes,while some motorists who were already in Abeokuta but held up within the venue of the event, had to leave their vehicles on the road till 6pm when the mega protest was over for the day.

Nollywood stars Bolaji Amusan popularly known as Latin and Odunlade Adekola, showed up at the NNPC junction mega rally and joined the youths in their protest against police brutality and bad governance.

At exactly 9.47am, the national anthem was rendered by the protesters and the Ogun State anthem followed.

They equally observed a minute silence for all the fallen heroes who had died during the struggle by doing this on their knees.

Their coordinators said the protest would last till 6pm and warned that there should be no any form of vandalisation or stealing.

Music blared from the loud speakers with protesters dancing to numbers from the late Afrobeat king, Fela Anikulapo-Kuti, and Hip hop star Davido and Oritsefemi among others.

Economic activities and vehicular movement around Panseke Under-bridge were also paralysed as another set of protesters converged under the bridge spilling onto the roads.

The same experience played out on Lagos-Abeokuta Expressway, where the protesters also took over Sango-Ota axis, where they decried the neglect of the road, which had failed in several sections.

But at Obada axis and Adigbe Junction on the road, another set of #ENDSARS youths block both inward lane into Abeokuta and outward lane, and halted vehicular movement till 6pm.

On the Lagos-Ibadan Expressway, the #ENDSARS protesters took over the road around Mowe, Arepo and Berger axis.

Recall that the #ENDSARS entered its 12th day on Monday as the Nigerian youths continue to mount campaign against police brutality and extra-judicial killings.

They are asking for total reformation of the Nigeria Police.

Though the police authorities had taken some measures aimed at reforming the police like replacing the SARS with SWAT, the youths rejected this, insisting on total reformation.

They have said they would continue with the protests until the government “accedes to our demand, we don’t want SARS, we don’t want SWAT, we want police reformation and good governance.”