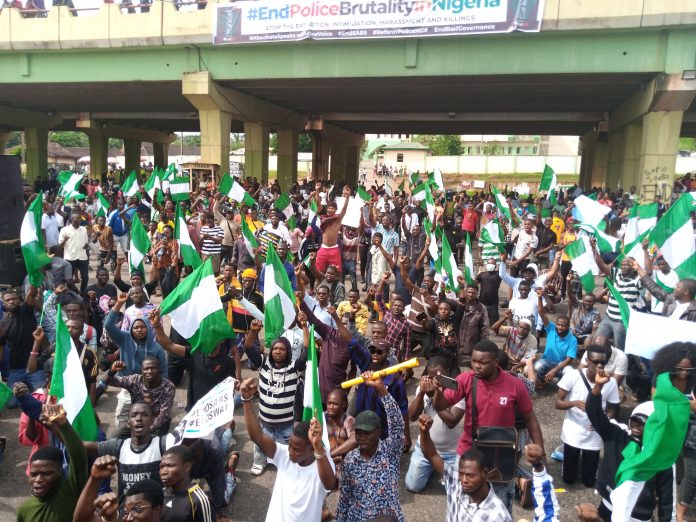 As early as 8am this morning, scores of #ENDSARS protesters had blocked all roads leading to the Ogun state government secretariat at Oke Mosan, Abeokuta as they equally took over the NNPC junction.

They blocked the roads with cars and other impediment, which forced many civil servants and other residents who were commuting on the route to take to trekking to their various destinations.
Some of the workers had to park their cars in adjoining streets, while they either make up for their journey on commercial motorcycles popularly known as Okada while some who could not afford such luxury had to complete their journey on foot.
Also affected were those travelling inward and outward Abeokuta through Kabape-Siun-Sagamu interchange. They also had to look for alternative routes to enter the town or leave.
Learnt some of the protesters had also mounted a blockade at the Sagamu interchange.
Most of the protesters who donned black T-shirts and jeans pants equally set up a stage for music and other excitement at the NNPC junction.
Some of them were clutching the national flag, while four flags donned the four corners of the stage.
Some exotic cars and other manner of vehicles were also used as blockades. Roads affected were Abiola Way, Kuto- Oke Mosan Road and the Ibara GRA- NUT area.
Motorists who ran into the blockades had to make a U-turn to link alternative routes.
A detachment of policemen and men of the Nigeria Civil Defence and Security Corps were stationed under the NNPC bridge.
Many of them were armed but they were just watching the protesters doing their thing, without disturbing them.
When contacted the state Police Public Relations Officer Abimbola Oyeyemi said the security men were there to provide security for the protesters and prevent the protest from being hijacked by hoodlums.

At exactly 9.47am, the national anthem was rendered and the Ogun State anthem followed.

They equally observed a minute silence for all the fallen heroes who had died during the struggle by doing this on their knees.

Their coordinators said the protest would last till 6pm and warned that there should be no any form of vandalisation or stealing.

Recall that the #ENDSARS entered its 12th day today, as the Nigerian youths mount campaign against Police brutality and extra-judicial killings.
They are asking for total reformation of the Nigeria Police.
Though the policeauthorities had taken some measures aimed at reforming the police like replacing the SARS with SWAT, the youth rejected this, insisting on total reformation.
Share on:
WhatsApp