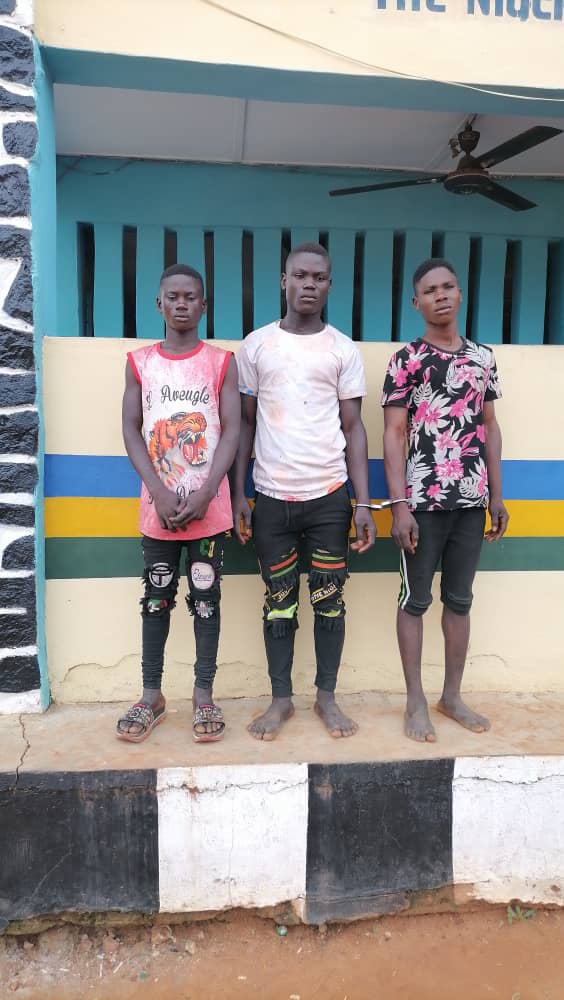 He said the trio were arrested following a report lodged at Ifo Police Station by an administrative Officer of So-Safe Corps, Alimi Olasunkanmi.

He had told the police that while the victim went to take her bath at Odo-pata stream at Pata Abiodun village in Ifo Local Government oarea at about 10.00am on Wednesday, the suspects ambushed her, dragged her into a nearby bush and took turn to have sex with her.

Oyeyemi said while the devilish act was going on, one of them was video- recording the act with a threat that if the victim dare report them, they would upload it on the Internet to ridicule her.

On getting this report, the Divisional Police Officer, Ifo, Adeniyi Adekunle led his detectives to the scene with some So- Safe Corps members where the suspects were promptly arrested.

The police spokesman said the suspects all confessed to the commission of the crime, while the victim has been taken to the hospital for medical treatment.

Meanwhile, the state Commissioner of Police, Edward Ajogun has directed the immediate transfer of the suspects to Anti-Human Trafficking and Child Labour Unit of the State Criminal investigation and Intelligence Department for further investigation and diligent prosecution.

The CP also appeal to parents and guardians to warn their children and wards to desist from any form of anti-social behaviour “as the Command under his watch will not spare anyone caught in such vices.”