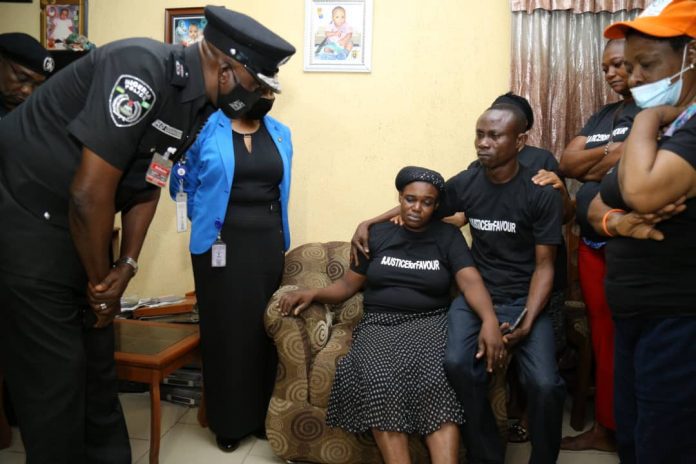 The Commisioner of Police, Lagos State Command, Hakeem Odumosu, has ordered that more detectives be deployed to arrest other fleeing suspects who gang-raped 13-year-old girl, Favour Ikechukwu to death.

He disclosed this on Tuesday when he went to deliver condolence message to the family of the deceased at Ejigbo area, on behalf of the Inspector-General of Police, Muhammed Adamu.

Recall the victim was gang-raped to death by some unscrupulous elements on 30th September, 2020 by 8.30pm, at Olanrewaju Street, Ejigbo area of Lagos State.

Odumosu assured the victim’s family that the Nigeria Police would do the needful to apprehend every culprit involved in the barbaric act and get justice for Favour.

The state Police Public Relations Officer, Olumuyiwa Adejobi, in a statement released on Tuesday said Odumosu while promising the family of police’s constant support, directed the Deputy Commissioner of Police, Criminal Investigation Department, Yetunde Longe, who accompanied him, “to deploy additional detectives from her office to go after the fleeing culprits and subject them to prosecution as soon as possible.”

In another development, the Commissioner of Police, seized the opportunity to address the residents of Ejigbo Local Council Development Authority when he inaugurated the refurbished and newly constructed office complex at the police Divisional Headquarters Ejigbo, Lagos State.

The complex was refurbished and some new offices were built by the Chief Executive Officer of Grooming International Centre, Dr Godwin Nwabunka, who described his gesture as a reflection of the community policing agenda of the Inspector-General of Police, with a view to achieving effective policing of Lagos State and Nigeria at large.