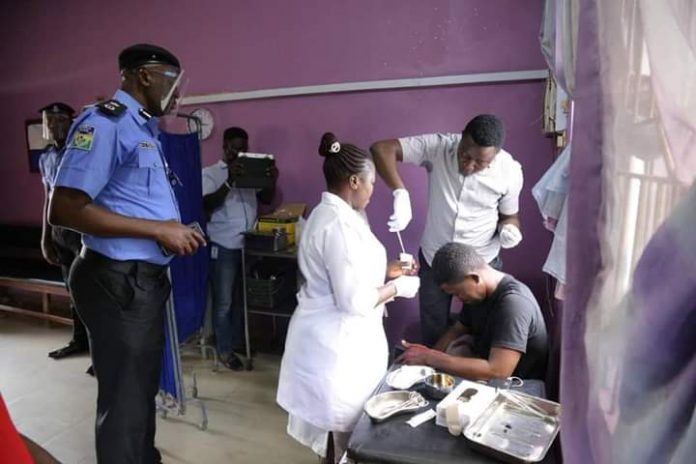 The overzealous cop had hit a PUNCHman, Kayode Jaiyeola, with a baton on the head and injured him at Maryland, Lagos on Thursday, while carrying out his assignment during a protest on Independence day,

According to a statement by the state Police Public Relations Officer, Olumuyiwa Adejobi, the CP was monitoring the deployment and operational activities of officers and men of the command for the enforcement of the order against unlawful gathering and protest by some unpatriotic individuals when he got report of the attack.

He said, “The CP cut-off his movements to stay throughout the journalist’s treatment and subsequent discharge.

Adejobi added that preliminary findings carried out by the Commissioner of Police and eye witness accounts from senior officers on ground, revealed that the cop suddenly attacked the journalist, without any previous altercation or confrontation.

“This propelled the Commissioner of Police to order for his trial in order to serve as deterrent to others who are fond of engaging in unprofessional and unethical conducts,” he added.

Meanwhile, the CP urged the general public to believe in the command’s commitment in sanitising and reforming the policing system in Lagos State in conformity with the international standards.

On September 16th, 2020, President Muhammadu Buhari signed into law a new Police Act 2020 to replace the old Police Act 2004 which its key amendments is to do among other things enhance professionalism in the police.

Even the Section 37 of the Act 2020, states that ‘A suspect shall be accorded humane treatment and shall not be subjected to torture, cruelty, inhumane or degrading treatment.’