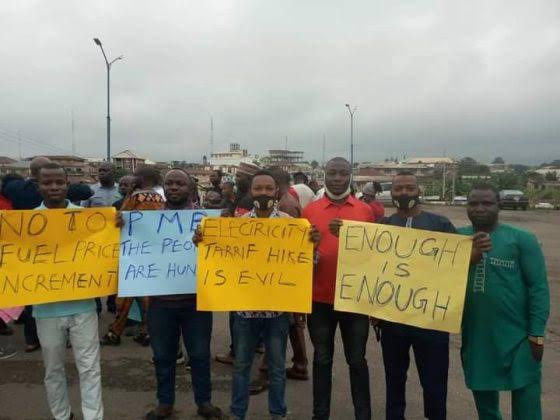 Protest greeted Osogbo, the capital of Osun State, on Friday over the increase in electricity tariffs and fuel pump price in the country.

The protest was staged by the Coalition for Civil Societies in the state.

Early in the morning, the protesters gathered at Freedom Park, Osogbo, and took off from there into the streets of the Osun capital by 8.30am.

The protesters bore placards with different inscriptions regarding their grievances over the hike in the prices of electricity tariffs and petrol price.

According to them, the President Muhammadu Buhari-led All Progressives Congress administration’s approval of the new electricity tariffs and increment in the pump price of petrol remained the government’s “highest level of insensitivity and wickedness.”

There have been public outcries since the government announced the two price hikes early this week.

In September the price is now between N158 and N162 per litre.