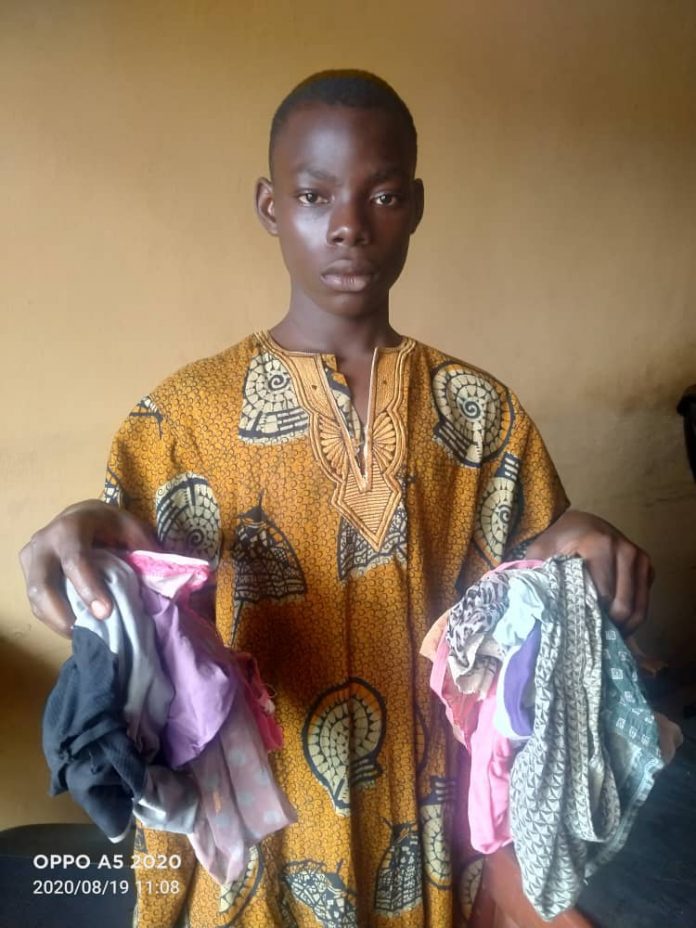 The Operatives of the Ogun Police command say they have apprehended a 16-year- old boy Adeniyi Muhammed, who sneak into homes to steal female’s pants.

According to the state Police Public Relations Officer, Abimbola Oyeyemi, the suspect was said to be in possession of 14 of such pants when he was arrested at Ayetoro, in Yewa North Local Government Area of the state.

He said the suspect had confessed that he was working for an accomplice who is currently on the run.

He said the suspect was arrested following a report made at Ayetoro Police Stationby one Amudalat Opaleye, a resident of Kano Street in the town that at about 6am of Tuesday 18th of August 2020, the suspect sneaked into her room and stole her pant.

He said firther, “She added that but while trying to sneak out, the suspect was caught with the pant.

“Acting on the complaint, the Divisional Police Officer, Ayetoro Division, Mobolaji Jimoh, detailed his detectives to the scene where the suspect was promptly arrested.”

Oyeyemi added that a search warrant was executed in his dwelling house and another 14 used female’s pants were recovered there.

Oyeyemi said, “The suspect has confessed to the commission of the crime but claimed that he was sent by somebody to get those pants for him.

“Effort is on top gear to get his so-called accomplice arrested.

Meanwhile, the state Commissioner of Police, Edward Ajogun, has directed that the suspect be transferred to the State Criminal Investigation and Intelligence Department for further investigation.